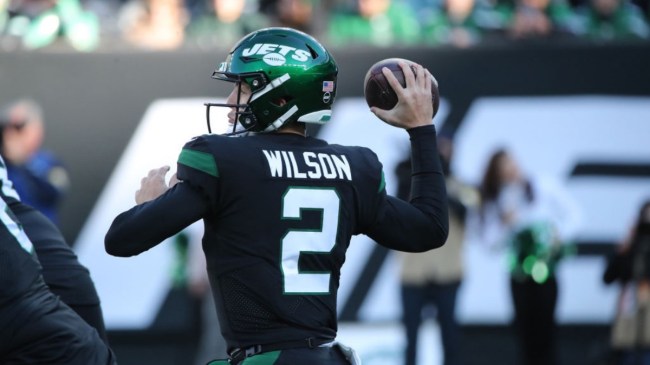 It all started with his ex-girlfriend accusing him of cheating on her with one of his mom’s friends. While she believed the accusation would take the heat off of her for dating his best friend, it actually helped Wilson achieve a higher level of popularity than his play on an NFL field ever had.

Wilson was offered a role as a recruiter for an adult entertainment company. his jersey sales skyrocketed. One of his newest teammates had a shirt made to support his quarterback.

A fan even showed up to training camp in this incredible custom jersey and got it signed by Wilson’s teammates.

This weekend, Zach Wilson will make his first appearance of the season against the Pittsburgh Steelers.

Ahead of the matchup, Steelers defensive lineman Chris Wormley cracked a joke about Wilson’s off-field activities on an episode of his podcast, “The Sick Podcast: The Chris Wormley & Friends Show”.

On Sunday, Wilson gets his first chance to shift the conversation from his dating his life back to his performance on the field for the first time since the story about his mom’s friend broke.

Wilson had a disappointing rookie year and has missed the first 3 games of this season because of a knee injury, but he bulked up during the offseason and there is hope that he’ll improve in year 2.

On Sunday, he’ll get his first chance to show whether he can give fans something to talk about other than his mom’s friends.