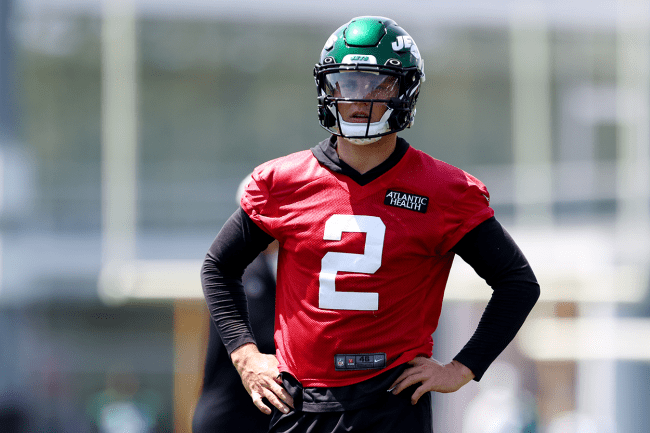 Since then, Wilson’s mom issued a vicious warning about social media decorum and ruled out one of her friends, he received a $69,000 job offer from an adult entertainment company, interest in purchasing his jersey has skyrocketed, and he offered an incredible response to the rumors and accusation. Meanwhile, Wilson has had to prepare for his second year as the starting quarterback for the New York Jets.

By all accounts, he is much improved. Wilson is much bigger than he was a year ago after putting on significant weight and his head coach expects that he will continue to climb the mountain of success.

Although the Jets do not expect to win a Super Bowl this year, Wilson is the team’s future and the team is building around its No. 2 overall pick from 2021. Part of that building came during the offseason.

With the No. 10 overall pick in the 2022 NFL Draft, the Jets picked wide receiver Garrett Wilson out of Ohio State to line up next to Elijah Moore, who the team drafted in the second round last year. They also drafted running back Breece Hall, who many considered to be the best at his position in the 2022 class. In addition, New York signed tight end C.J. Uzomah, who is coming off of a Super Bowl run with Cincinnati.

On Tuesday, as the Jets opened up training camp, the latter of the three showed up wearing an incredible shirt that pays homage to his new quarterback.

Either way, the first-year Jets tight end’s shirt could not have been more perfect. The team believes in Wilson and the former BYU quarterback is poised for a breakout year.