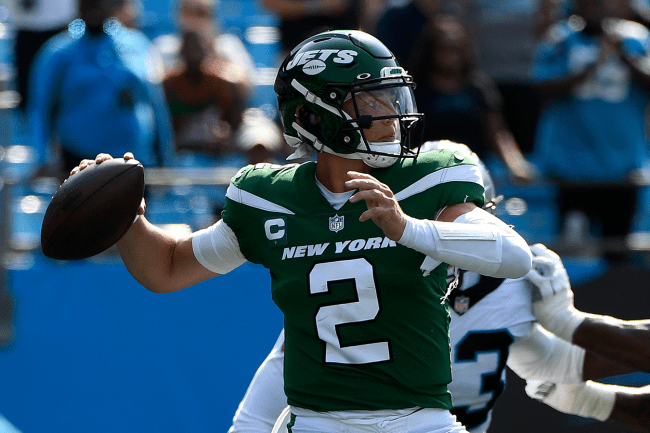 One of the biggest storylines across the NFL throughout the start of the 2022 season has been about Zach Wilson. Specifically, there has been a lot of conversation about his weight.

The second-year Jets quarterback came off of a very up-and-down rookie season. Although he didn’t have much help around him and struggled greatly at times, he also showed flashes of greatness.

Now, as he continues his first training camp with and understanding of how things work, Wilson is already looking the part. At 22 years old, he stands about 6-foot-2 and said that he finished the 2021 season at about 208 pounds.

Since the end of last year, Zach Wilson put in a lot of work in the weight room.

He has also been on a strict diet that likely included a lot of protein.

After Wilson arrived at the New York team facility earlier this month to throw during minicamp, head coach Robert Saleh called him “beefy” in a good way. And the first look at the former BYU signal-caller backed up his statements— his quads are massive.

On Tuesday, the Jets opened minicamp, which provided another look at Wilson’s weight gain. It also led Saleh to using another hilarious adjective to describe his quarterback that totally cracked himself up while addressing the media.

Not long thereafter, once the day wrapped, Wilson took the podium and revealed his current weight. He put on a solid 10/15 pounds of muscle.

Zach Wilson said he finished last season at 208 pounds and is now 221 pounds.

Wilson’s 2022 campaign will come with an understanding that the Jets may not be Super Bowl contenders, there are high expectations for a year-two bump. Will the extra muscle help Wilson really start to figure it out? Only time will tell.