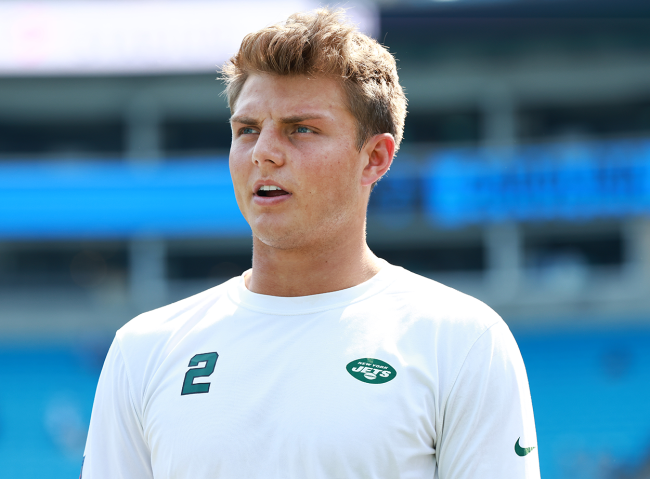 Zach Wilson’s first year with the New York Jets was not great. But it also wasn’t terrible.

The rookie quarterback out of BYU threw more interceptions than touchdowns and completed only 55.6% of his passes. However, his terrible team did not do him any favors and showed flashes of greatness.

Some of Zach's absolute best dimes of the year have been forgotten because they fell incomplete#Jets pic.twitter.com/GLHWG9FoMV

Over the course of the offseason, the Jets made a lot of big moves. They brought in a big, plug-and-play guard to help with protection, a lot of tight end help, and added a superstar wide receiver, a big offensive tackle and a highly-regarded running back in the NFL Draft.

New York desperately needed to get better on both sides of the ball and did, but for Wilson, the improvements made on offense should allow him to make a second-year jump. In addition, by all accounts, he has had a tremendous offseason.

Not only did he put in the hours to get better on the field, the team gave him a strict strength and conditioning plan and Wilson bought in. Head coach Robert Saleh recently spoke about his quarterback’s size and called him “beefy,” but in a good way.

"He looks good, a lot of guys look good" pic.twitter.com/ZAY6p09dSD

Although it was a strange adjective choice for a signal-caller, photos from Jets training camp back up his word choice. Wilson looks much bigger than he did a year ago.

Listed at 214 pounds last season, the former second overall pick is — if not heavier, than better cut. He looks strong and his quads in particular are huge.

I cannot wait to watch Year 2 of Zach Wilson pic.twitter.com/ibTfacdNVs

Wilson really can’t play much worse than he did last season. At least, statistically.

With his extra strength and fine-tuned mechanics, there is a belief that the Jets could take a huge step forward behind Wilson in 2022.