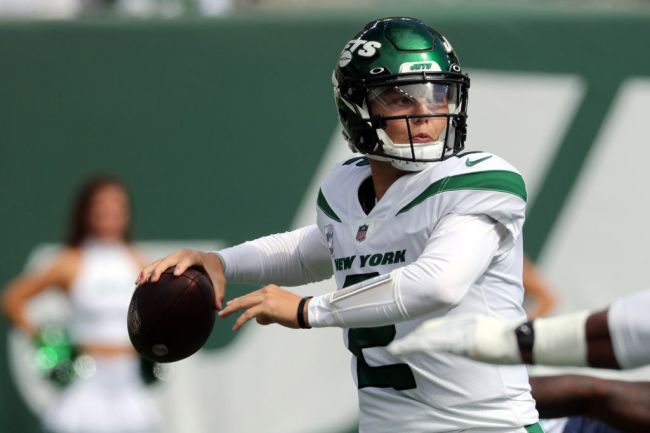 Heading into his 2nd year in the NFL after a brutal rookie year, you would expect most of the offseason news about Zach Wilson to be about the former number 2 overall pick to be about how he has developed on the field.

That has not been the case lately for the New York Jets quarterback.

Instead, it is Wilson’s personal life that has been grabbing headlines.

Last month, Wilson’s ex-girlfriend came under fire for dating his best friend and college teammate Dax Milne. In an effort to take some heat off of herself, she claimed that Wilson had cheated on her with his mom’s best friend. The revelation did not have the intended effect.

His teammate, CJ Uzomah even showed up to camp wearing a shirt naming Wilson as the “Person of the Year” in a show of support for his new quarterback.

His jersey has also seen a massive uptick in popularity and now it seems fans are even customizing jerseys in his honor.

That fan showed up to Jets camp today with the jersey and even got a bunch of Wilson’s teammates to sign the jersey.

By the end of the day, this fan had received autographs from Garrett Wilson, Elijah Moore, Breece Hall, CJ Uzomah, Sauce Gardner, and Jermaine Johnson.

This surely won’t be the last time we see some custom gear supporting Zach Wilson as the legend of the Jets quarterback continues to grow.