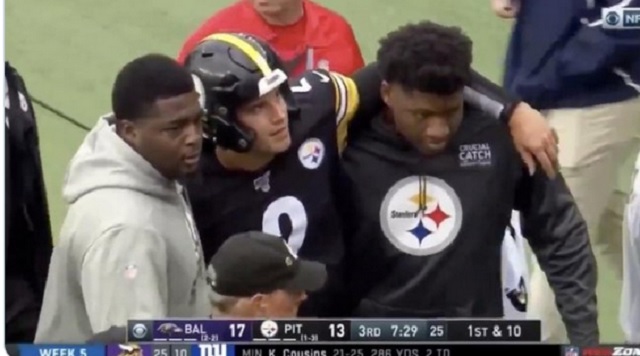 Pittsburgh Steelers quarterback Mason Rudolph left Sunday’s game with a concussion after appearing to be knocked out cold from a hit by Baltimore Ravens safety Earl Thomas II in the third quarter. Rudolph left Heinz Field to be further evaluated at a hospital.

Mason Rudolph knocked out on this hit. No flag. pic.twitter.com/zjs92AI904

Unfortunately Rudolph had to walk off the field with help from a few teammates because the stadium medical cart was broken.

Mason Rudolph had to be carried off the field because the medical cart malfunctioned. pic.twitter.com/186nVyVxtp

Lowlight of cart breaking down so Mason Rudolph has to be carried off with a concussion #steelers pic.twitter.com/KCO82uXsao

Update: The Steelers claim that the cart failed due to ‘operator error”.

Steelers spokesman confirmed report that the medical cart that came out for Mason Rudolph failed due to operator error. https://t.co/qLRfQImkE9

Stadium source: The medical cart that would have transported Mason Rudolph from the field failed because of operator error, not because it broke down. The NFL has already called to investigate. Plus, according to source, Rudolph wanted to walk off the field, not be carted.

The medical cart situation drew the ire of Twitter and NFLPA President George Atallah who were astonished that such a rich league could not afford a working medical cart.

So you mean to tell me this multi billion dollar corporation can’t afford to ensure there’s more than one functioning medical cart at every venue? 🤦‍♂️

I'm sorry, but is absolutely absurd that any medical professional is allowing Mason Rudolph to walk off the field.

I don't care if the cart malfunctioned. Strap him to the backboard and have a bunch of guys carry him off that way.

Negligent to allow a guy to walk off like that.

A multi billion dollar business that “cares about its players” made Mason Rudolph walk off the field after a concussion because their only medical cart broke.

From the NFL, on the #Steelers cart issue that left QB Mason Rudolph being helped off the field rather than leaving in a cart: pic.twitter.com/1HVGeApoJD

If “appropriate medical care” for someone in the condition Mason Rudolph was in is to walk them halfway around the damn stadium to get them to an ambulance, then we can no longer question the league’s concern about head injuries:
It really doesn’t exist. pic.twitter.com/Np25i03JT5

How the hell was a medical cart "not necessary", the dude could hardly walk.

A guy that has his equilibrium so impacted by the blow to his brain should not be stumbling 200uds to locker room. Do you think hospital had him WALK up to his room???

He was unconscious and his body went limp before he even hit the ground. There’s no reason they shouldn’t have taken him off on another vehicle or even carried him by hand on a stretcher. Absolute bullshit.