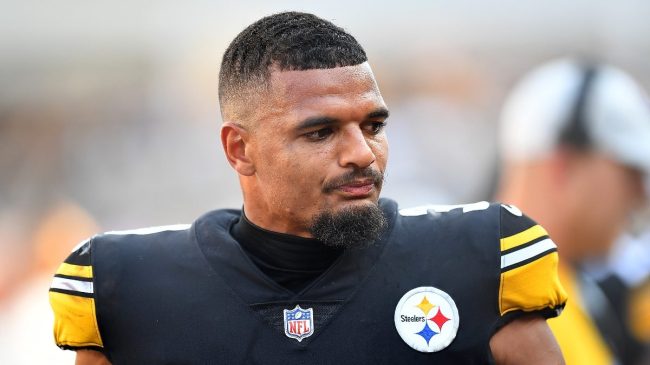 The Pittsburgh Steelers took a brutal loss against the New York Jets on Sunday. They largely struggled on offense, which has been a continuous theme so far this season. So much so, that Mike Tomlin subbed in rookie quarterback Kenny Pickett. It wasn’t enough though, as Pittsburgh fell to a franchise seeking its first winning season since 2015. Now, Minkah Fitzpatrick reacts to the tough loss.

Steelers Safety Minkah Fitzpatrick ‘Frustrated’ With Loss To The Jets

According to Around the NFL, Fitzpatrick isn’t too happy with his team’s performance on Sunday. At one point, the Steelers held a 20-10 lead in the fourth quarter. Pittsburgh collapsed and gave up 14 points, which ultimately led to the Jets taking the lead late in the game. Minkah Fitzpatrick clearly isn’t happy with the end result of the contest.

“It’s very frustrating. It’s frustrating losing to people that you know that you’re better than, more talented than. Especially when you have the team that we have. We’re a great team with a lot of talent. A lot of great young players. I think we are way better than what we’ve been putting on display.”

A lot of the blame can be placed on the offense. Although the fans were happy with the quarterback change, Kenny Pickett didn’t do all that much to provide the boost the team needed. Sure, he secured two rushing touchdowns, but his three interceptions prevented the Steelers from gaining any momentum in the second half.

The defense actually looked rather solid for the most part. It’s just difficult to maintain a lead when the defense is on the field much more often than the offense. This is something Minkah Fitzpatrick understands, as the Steelers safety dives into how the Jets earned the victory.

Look for the Steelers to potentially bounce back in Week 5 as they take on the Buffalo Bills. However, on paper it’s looking like Pittsburgh may fall to 1-3.