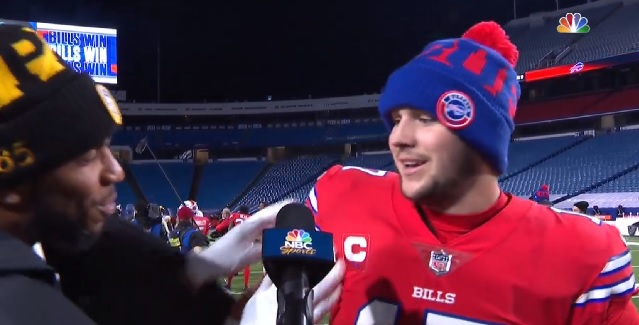 For the past few weeks, Ebron has had issues with dropped passes which has led to head coach Mike Tomlin cutting his minutes on the field. Despite getting limited playing time on Sunday, Ebron still found a way to drop a ball vs the Bills

This time by Eric Ebron, who had 3 last week. pic.twitter.com/pEVVDq8y4j

After the Steelers’ loss, Ebron interrupted Bills quarterback Josh Allen during his postgame interview and gave him an awkward embrace to congratulate him for the win which rubbed Steelers fans the wrong way.

Eric Ebron. WTF are you thinking? And why are you more excited for the Bills to win than Josh Allen is?? #Steelers pic.twitter.com/QjWIOwbcJa

I’d release him after this https://t.co/c8Qdxu1gY5

You can’t be out here dropping passes and be all joyful after a loss https://t.co/Wtp2aRZFzd

Ebron is not a steeler in my opinion. Never saw Hines Ward do that. What a disgrace he is to the team https://t.co/QCsh8dP4tr

IDK how I feel about Ebron anymore…😞 https://t.co/njoL6MEIl4

Ebron… what are you thinking. You seem to be full of energy and having no care that the team lost. “Nice win?!” I don’t get this one bit https://t.co/wMdiLpchXj

This goes against everything I stand for as a football player/fan & as a competitor. I won’t root for this team again until @Ebron85 is off the roster. https://t.co/PdlaRwxyBy

And he dropping HELLA passes??? Yeah he working against us for sure https://t.co/MDSqCL1hhq

Are you kidding me Ebron? You shouldn’t be happy right now. Your team lost two straight games! https://t.co/rBr2A46JCK