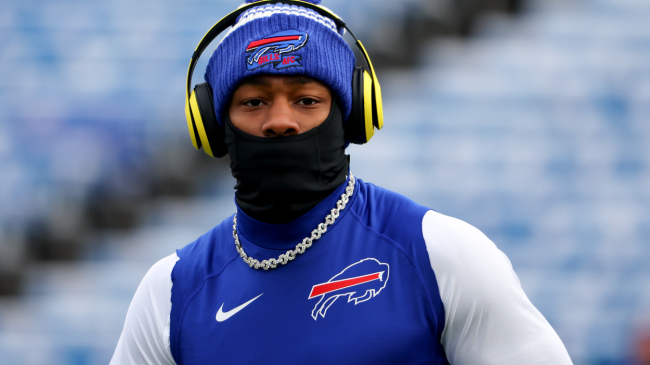 Stefon Diggs was not happy with his team’s performance in the season-ending loss to the Bengals. Buffalo mustered only 10 points in the playoff defeat causing frustrations to boil over.

Diggs was seen in an exchange with his quarterback during the game which now has fans talking.

Josh Allen played maybe his worst game of the season on Sunday. The passer completed just 59% of his attempts while throwing an interception. He did score the team’s only touchdown with his legs, running a quarterback sneak in for a second quarter score.

Unfortunately, his lack of success through the air hampered the Bills’ offense. Stefon Diggs grew tired of the unit’s play, and he took it out on Allen on the sidelines.

One person wrote, “Stefon Diggs is FED UP with Josh Allen.”

Another fan said, “Eli Apple has Stefon Diggs yelling at Josh Allen on the sideline.”

Diggs was targeted 10 times in the game, but he was only able to reel in four of those passes for a total of 35 yards. This interaction with Josh Allen wasn’t the only moment of anger for the receiver.

Bills WR Stefon Diggs darted out of the locker room with all his stuff before some of the Bills coaches were even down to the tunnel area. Practice squad RB Duke Johnson stopped Diggs before he left the stadium and brought him back to the locker room. He left a few minutes later.

Diggs was emotional after seeing the Bills come up short of a Super Bowl in yet another season. After entering as the AFC favorite, Buffalo saw a divisional round exit for a second straight year.

The Bengals, meanwhile, will make another AFC Championship appearance in a heavyweight matchup against the Chiefs.