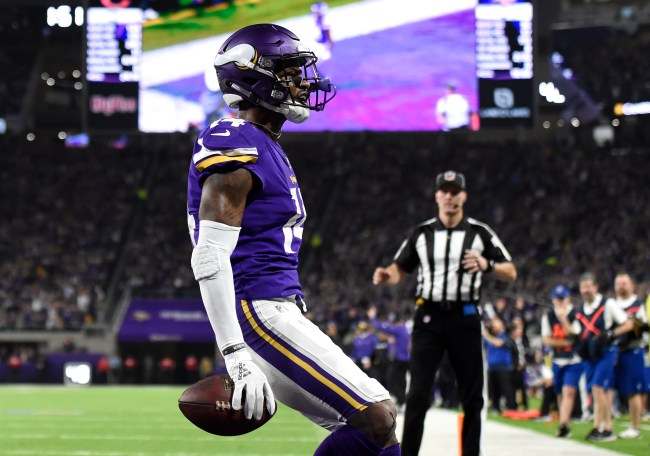 Stefon Diggs brother Trevon caused a bit of stir this afternoon when he posted this pic of the Vikings wide receiver wearing a Redskins jersey on Instagram.

Stefon Diggs’ brother posted this to his Instagram today. pic.twitter.com/R6JSTAfj0A

Trevon went on to post another pic on his IG stories with the caption “Bring Him Home” before deleting it.

There are no reports of the Vikings actively shopping the Maryland native to Washington but Redskins fans were hyped nonetheless.

Stefon Diggs brother doesn’t just randomly wake up one day and post an edit of his brother in a Redskins uniform. I’m just saying….

Stefon Diggs either is clearly in talks to leave Minnesota .. or he clearly doesn’t want to be there anymore. Cousins is trash, and he been said it.

Come to Case Keenum. Come home Diggs. Be back at home

This & @stefondiggs brother posting a pic of Stefon in a Skins uniform is one way to set #Redskins & #NFL Twitter on fire on a Saturday afternoon! https://t.co/qmqoMqYdb9

ESPN’s Adam Schefter spoke to an NFL source who said there was no way the Vikings were trading Diggs to the Redskins.

Despite Stefon Diggs trending on Twitter and his brother posting a picture of him in a Redskins’ uniform, he has not and is not being traded to Washington. “F—- no,” said one source.