Stefon Diggs Reportedly Frustrated With Vikings Organization, Teammates Are ‘Wondering If He Wants To Be There’ After He Skipped Practice 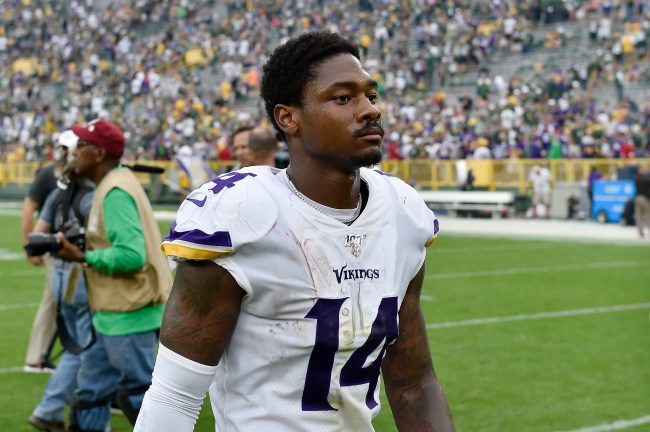 There’s some drama brewing in Minnesota.

After the Vikings loss to the Bears, Diggs was apparently frustrated with the team’s lackluster offense.

On Monday afternoon the Vikings wide receiver posted a cryptic tweet that led the Internet to believe that he wanted to be traded.

Diggs went on to skip practice and the team had no explanation for his absence which sparked more trade rumors.

Stefon Diggs' absence today at Vikings practice was "not injury related," the team reported. Diggs hasn't spoken with the media in two weeks and was visibly frustrated on the sideline in Sunday's loss to the Bears.

According to NFL.com’s Ian Rapoport, Diggs has been openly frustrated with the team and his teammates are not sure if he wants to be there anymore.

On #Vikings WR Stefon Diggs: His frustration with the organization has been palpable. He was not at practice yesterday for non-injury reasons. Teammates are left wondering if he wants to be there. The team is adamant he is not available for a trade, barring some massive deal.

Apparently, the Vikings are telling teams that were interested in trading Diggs that he’s not on the market.

A team that told me today they’d definitely be interested in Stefon Diggs said they were informed the #Vikings WR would not be traded. #SoTheresThat

In regards to Diggs, this is what one team conveyed is the information they have, as stated below. Nothing more. Nothing less. https://t.co/hLOqdKzVpz

Not only are the Vikings dealing with the Diggs drama but they’re also dealing with an unhappy Adam Thielen, who threw QB Kirk Cousins under the bus after Sunday’s loss to the Bears.

It’s going to be a long season for the Vikings.