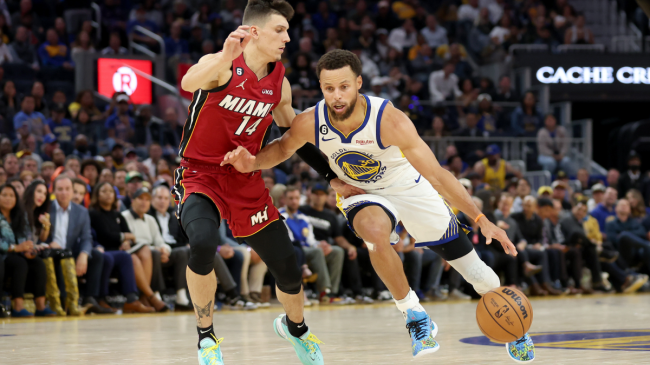 Steph Curry was cooking in The Bay on Thursday night. The superstar scored a game-high 33 points to help his team land its third win of the season.

Curry was his typical self from the outside, connecting on 7 of his 14 three-point attempts. Overall, he converted 59% of his shots, just missing out on a triple double with seven boards and nine assists.

But it wasn’t just his shooting performance that had fans talking after the game. Curry put on a dribbling display, taking complete advantage of a Miami defender.

Steph Curry puts Tyler Herro on skates then embarrasses him with a three-ball.

With the game still tight late in the fourth quarter, the guard made light work of the Heat defensive unit. Herro attempted to lock the sharpshooter down, but a few quick crossovers from Curry led to embarrassment.

Chef cooked him up! 👨‍🍳👌 pic.twitter.com/yGa9DIKe1Z

Fans erupted after seeing the move on social media. Take a look at the best Twitter reactions below.

One fan commented, “Steph just shook Herro,” after seeing the clip. Herro nearly fell out of his shoes trying to defend Curry’s crossover. He had no answer.

Another person wrote, “OMG Steph just fried Tyler Herro.” It’s going to be tough to come back from that.

Curry drained the three-pointer after the deadly crossover for good measure. That shot put his team up by eight points with just over five minutes remaining in the game. Golden State would go on to win the contest by a score of 123-110, and this was definitely the highlight of the night.

Chef Curry will look to keep the good vibes going when the Warriors take on the Hornets this Saturday. Herro, meanwhile, will have to pick himself up off the mat and hope the embarrassing clip fades into the abyss.