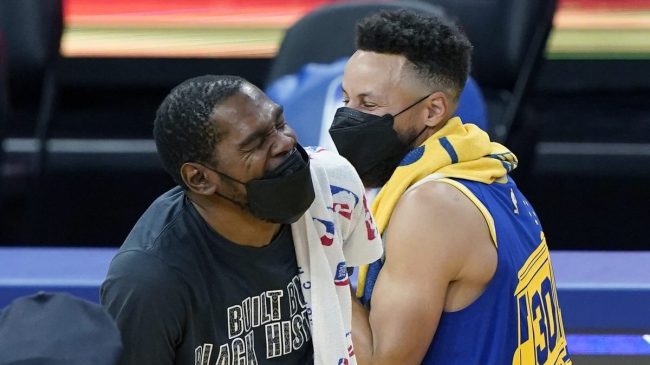 Kevin Durant’s time with the Golden State Warriors is the stuff of legend. In three seasons with the Dubs, Durant won two NBA Championships, two NBA finals MVP, and reached another NBA Finals before tearing his Achilles.

The three-year stretch was one of the most dominant by any team in NBA history. But then Durant left.

Injuries and clashing egos led to Durant heading from the west coast to the Brooklyn Nets on the east coast in the summer of 2019.

But we almost got a Durant-Warriors reunion this summer.

Steph Curry Wanted To Bring Kevin Durant Back To The Bay

The Warriors were back to their winning ways in 2022.

Golden State went 53-29 in the regular season before torching the field in the NBA playoffs. Steph Curry cemented his NBA legacy and put into a Finals MVP performance to lead the Warriors to a championship over the Boston Celtics.

But Curry is always looking to improve, both personally and as a team.

In a recent interview with Rolling Stone magazine, the future Hall of Famer said he told the organization that they should pursue a trade for Durant over the summer.

“There was a conversation internally amongst us about ‘If he was available, would you?’ Every team has those conversations, and obviously in our situation, they’re gonna call me and ask me, ‘How do you feel about it?’

“I was never hesitant. The idea of playing with KD and knowing who he is as a person, from our history in those three years, I think KD’s a really good dude. I think he is misunderstood. I think he has had certain things happen in his life that hurt his ability to trust people around him, in a sense of making him feel safe at all times. So all of those things, I understand, having played with him and gotten to know him. I love that dude.

“And if you said, ‘Oh, KD’s coming back, and we’re gonna play with him,’ I had so much fun playing with him those three years, I’d be like, ‘Hell, yeah!’

Durant ended up staying put in Brooklyn after a whirlwind offseason. But it doesn’t appear to be for a lack of trying on Curry’s part.