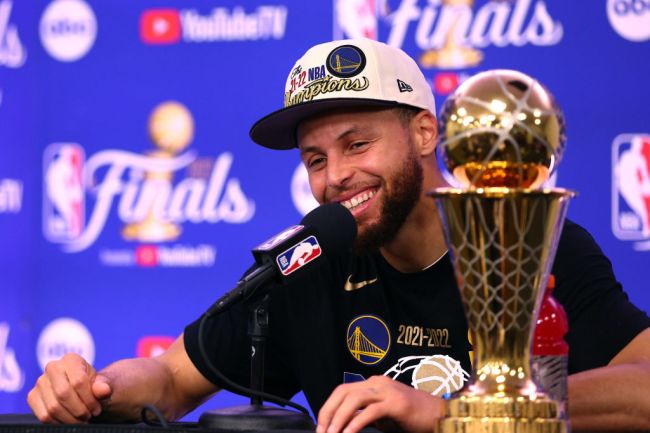 An incredible week for Steph Curry just got even better. Last night, he scored 34 points to lead the Golden State Warriors to their 4th ring in 8 seasons while being unanimously named Finals MVP for the first time in his career.

That by itself would be enough to make this a memorable time in Curry’s life, but today his alma mater decided to give him something else to celebrate. Davidson’s Director of Athletics revealed that the school will be honoring Curry in 3 ways following his impressive accomplishment.

Davidson will be holding a graduation ceremony for him, inducting him into their Hall of Fame, and retiring his number. That last celebration is particularly important as no player has ever had their number retired at Davidson.

“August 31, 2022, we are going to celebrate Stephen Curry in three ways, because he likes threes. We’re going to have a mini graduation ceremony for him where he gets his degree, we’re going to induct him into the hall of fame, and we’re gonna not just retire his jersey, but he will be the first person to have his number retired at Davidson College.”

Curry first came into the national spotlight as a member of the Davidson Wildcats basketball team. Over 3 seasons with the team, he averaged 25.3 points, 3.7 assists, and 4.5 rebounds while shooting an impressive 41.2% from 3.

During his sophomore season, he led Davidson on an incredible NCAA Tournament run that saw them make it to the Elite Eight as a 10-seed. In that year’s NCAA tournament, Davidson upset Gonzaga, Georgetown, and Wisconsin before running into Kansas, who would eventually be crowned national champions.

Now Curry will be celebrated for everything he brought to Davidson and the inceredbile achievements he’s been racking up since leaving college.