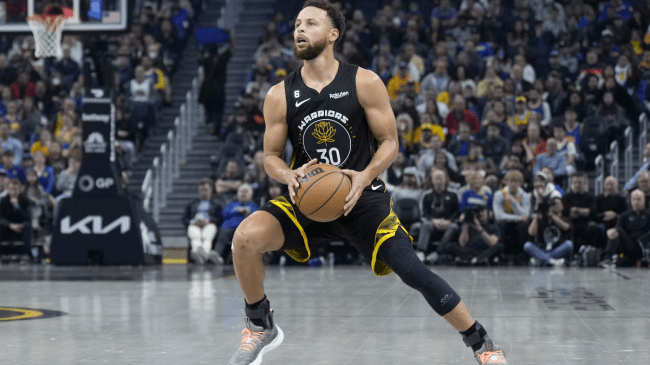 The Golden State Warriors took a tough loss on Tuesday night against the Mavericks, falling 116-113 on the road. A crucial call in the final seconds of action has fans upset on social media.

With just 10 seconds left on the clock, Steph Curry was called for a travel while attempting his patented step back move. The violation nullified a go-ahead three-point attempt and gave the ball back to Dallas.

Steph was called for a travel on this step-back attempt 😨 pic.twitter.com/Y4ZEGA9w3r

The Mavs would add a free throw to land the three-point win, leaving Warriors’ supporters irate online. And you can’t completely blame them. After all, it seems travels are never called in the NBA these days.

Look no further than this LeBron James clip where he picks the ball up mid-dribble, carries it five steps, then restarts dribbling after crossing midcourt. The introduction of the Euro step and James Harden slide have all but eliminated the rule from existence.

But, on Tuesday, the officiating crew opted not to swallow the whistle. Instead, they blew the play dead in the most crucial point of the game. That led to a number of irritated fans blasting the referees online.

One person wrote, “Steph didn’t travel, as usual refs doing what they can to screw the Warriors.” Another commented, “They’ve gotta be targeting Warriors games because it’s the only time I see travels called.”

Even Steph Curry disagreed with the travel call, saying the following after the game.

“Bang bang situation. Dumb play by me to not take the layup. I got a little confused on what the time and the score was, honestly went for the hero shot. I didn’t think it was a travel to the point where you don’t let the play run out, but who am I to say?”

Regardless of what those thoughts are, the crew got the call correct on the court. According to the NBA rulebook, Curry’s pivot foot was established. Once he moved it, he committed the violation.

The loss dropped the Warriors to just 11-11 on the year. Curry and Co. will look to flush this deflating defeat before taking the court on Friday against the Bulls.