Stephen A. Smith Got Into Some Beef With His Own Burner Account And Lost 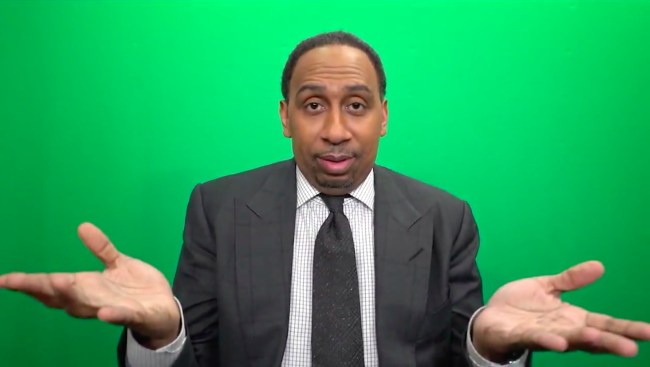 Stephen A. Smith is beefing with his ‘burner account’ on Twitter. I’d like to think that this is a result of Smith being bored in quarantine like the rest of us, but this is Stephen A. Smith we’re talking about here. It’s a day that ends in ‘y’ so who knows what’s going on?

This all started when Smith followed the burner account, ‘Stephen A. Smith Burner’ on Wednesday. The parody account is one of the more popular parody accounts out there with nearly 375,000 followers and whoever is behind the account noticed they picked up the very important follow from Mr. Stephen A. himself.

Smith may have nearly 5 million Twitter followers, but he only follows eight other accounts so getting the follow from the man is a big deal. The burner account was quick to share a screenshot proving Smith was indeed following it.

OUR MISSION IS ACCOMPLISHED!!! pic.twitter.com/19mAghC6Wh

Smith, seeing as how he follows a whopping nine people, saw the tweet and shot things down real quick before unfollowing the parody account.

It’s also worth pointing out that all of this went down on April Fool’s Day, so maybe Smith was just trying to get a laugh. Nevertheless, the parody account wasn’t too bummed by Smith following and then unfollowing the account.

SAS last week: “I got no problem with a burner account”

Stephen A when I said he followed me: pic.twitter.com/InzR1ARwxi

I think if you had to pick a winner of this ‘fight’ you’d have to give it to the burner account. The account briefly got a follow from the man they make fun of and gained some serious clout along the way.

We can always count on Stephen A. and Twitter to keep us entertained for a bit while we continue to stare at the walls inside of our homes.