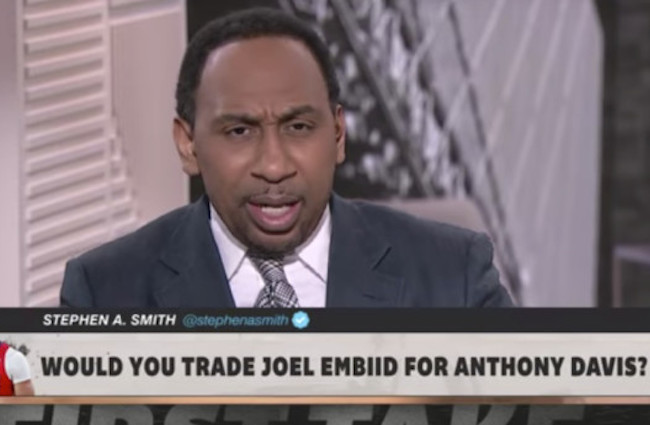 Stephen A. Smith is paid lots of money to give his opinion about sports topics, but, damn, that doesn’t mean that he doesn’t sound crazy sometimes when he speaks his mind. And, while the ESPN personality does bring up some good points, when he misses on things like athletes who aren’t actually playing in games because they’re injured and stuff, a lot of sports fans seem to rejoice a bit.

Today was one of those moments when Stephen A. Smith sounded a little out there, though, giving another unpopular opinion that leaves a bunch of NBA fans wondering if Stephen A. was on something.

That’s because, during a segment on today’s First Take, Smith said that there’s “no way” he’d trade Joel Embiid for Anthony Davis. While that may not seem that far-fetched given the two All-Stars’ stats compared with one another, it’s why Stephen A. Smith wouldn’t do the trade that legit has me thinking the guy’s smoking some sticky icky stuff. Take a look at the video below.

After breaking down some stats of both Embiid and Davis, admitting that the production is similar, Stephen A. Smith actually said that it’s because of Joel Embiid’s off-the-floor personality that makes him more marketable, and that’s why he wouldn’t do such a swap. I honestly can’t believe my ears.

“Hell no. I ain’t doing it, I ain’t doing it. And the reason I’m not doing it is because, numbers wise, the two are comparable. Joel Embiid is now averaging 27 (points) and 13.5 (rebounds)… it’s not just that. The numbers are comparable, and I’m certainly not saying he’s the complete package that Anthony Davis is as of yet, but he’s on his way.”

“Bottom line is, the numbers are comparable, but here’s where it really resonates with me: Joel Embiid is box office. You see all those people in Philadelphia? We’ve talked about his personality, he doesn’t just give you the production on the basketball court, he also gives you all the headlines.”

“I’m saying to myself that there’s not much of a discrepancy on the court between the two, but off the court, it’s night and day. Joel Embiid, whether he’s tweeting or whatever, he’s making headlines all the time, and it’s real fun. So I can sell, I can market him. And, to be quite honest, I can make more money off of Joel Embiid than Anthony Davis.”

The conversation continued with Jalen Rose weighing in on the question — saying that people only care about winning — but that he would trade Embiid for Davis. And, while Stephen A. Smith obviously has a strong opinion about, well, everything, the fact that he wouldn’t swap Joel Embiid for Anthony Davis because he’s getting more headlines off the court is one of those things that just seems ridiculous. Go home, Stephen A., you’re drunk.