Stephen A. Smith Tees Off On Kyrie Irving For Pleading With Players To Sit Out NBA’s Restart 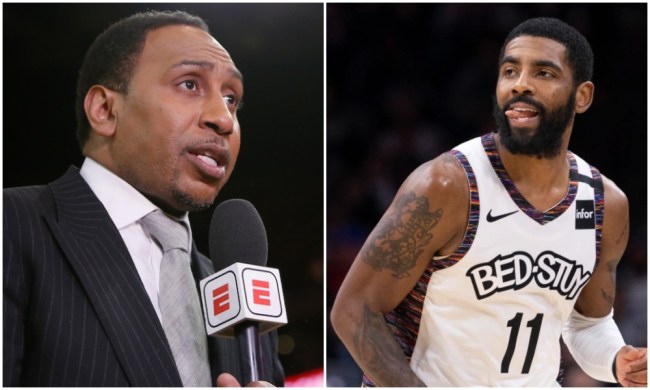 The NBA’s plan to resume play at the end of July has suffered a few blows over the past handful of days courtesy of Kyrie Irving.

Irving was the first player to come out and say that he is against the return with people still out on the streets fighting systemic racism and police brutality. The Nets guard then led a call with over 80 NBA players on Friday with several players reportedly spoke out against the NBA season getting back underway. Dwight Howard followed Irving and has said that he too wants players to sit out the rest of the season amid Black Lives Matter protests.

There is no denying that there is nationwide unrest at the moment, but Stephen A. Smith doesn’t think Irving and Howard’s push for players to sit out the season makes ‘any damn sense.’

During an appearance on ‘Get Up’ on Monday morning, Smith blasted both Irving and Howard while also making some very honest, and strong, points about the situation.

“You’re Kyrie Irving and you’re Dwight Howard if you are talking about not going back to work because of the coronavirus, [there’s] nothing to talk about…that is a separate subject.

“But, to sit up there and imply that at this particular moment in time that sports should not exist and we shouldn’t be going back to work because racial inequality and prejudice, these are things that have been going on for decades, if not more, some would say centuries, obviously when we’re talking about racial oppression. So, if that’s the case, there was no reason for anybody, your forefathers, your ancestors or anyone else between to ever show up to work. The reality is, you have a job to do.”

Certain things just don’t make any damn sense. This is one of those things…..what Kyrie and D-Howard are saying. And don’t y’all worry. I’m back on @FirstTake TODAY! Enough of folks getting away with this nonsense. Here I come! pic.twitter.com/ttR5OJ9eO7