Nets’ Kyrie Irving Is Reportedly Pushing For NBA Players To Consider Sitting Out And Not Play ‘During This Period Of Racial Tension In The U.S.’ 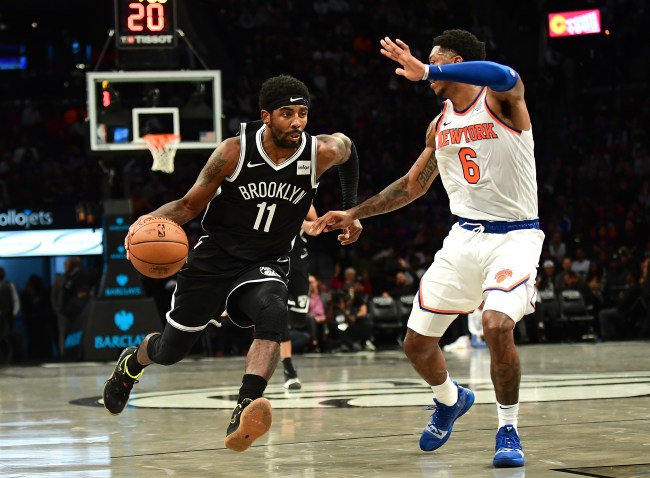 The NBA is beginning to get some pushback from certain players about restarting the season in Orlando next month amid racial tensions in the country.

But because of the George Floyd tragedy and the powerful movement for racial justice that’s sweeping the nation, some players believe it’s bad optics for a league comprised predominantly of black men to be sequestered in one location for up to three months merely to entertain the masses and ease the league’s economic burden, sources said.

“What message are we sending by agreeing to this during this time?” a black player told Yahoo Sports. “We’re out here marching and protesting, and yet we all leave our families in these scary times and gather to perform at a place where the owners won’t be at? What type of sense does that make? We’ll be going backwards. That place isn’t that magical.”

Apparently Kyrie Irving has been the “driving force” behind the scenes and believes that players should consider not playing during this period of racial tension in the United States”.

Adding to Taylor's report: I'm told today's conf call could involve up to 200 players. Also hearing that Kyrie Irving has been a driving force in organizing these calls, and in raising concerns over NBA's bubble plan. https://t.co/0voQafmveO

As @TaylorRooks, @HowardBeck reports, Brooklyn Nets star Kyrie Irving has organized a call tonight for players to discuss what position they should take. He’s of mindset that during racial tension, not returning to play should be considered, sources say. https://t.co/8W8VaZMxQh

While Kyrie believes players should consider sitting out, other players think playing would give them a bigger platform to deliver their message for change in the country.

Yahoo sources: Several players are planning to be creative and use the global attention the NBA platform provides to promote and support the Black Lives Matter movement when the league returns to play

Howard, I’m told, is correct on Kyrie Irving being “a driving force,” as he put it.

Separately, I can say there are prominent players who believe that Disney – and all those viewer eyeballs – provide an enormous stage on which to make statements to demand societal change. https://t.co/SvjBx50NLp