This Stephen F. Austin Defender Went Full-Send For An Epic Flop, Did Not Draw The Flag 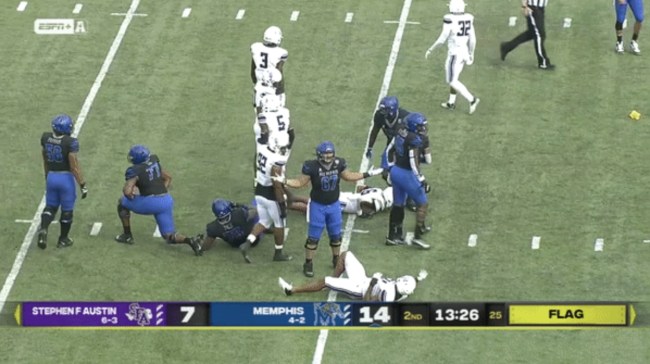 Stephen F. Austin took on its fourth FBS opponent of the season on Saturday and traveled to Memphis to face the Tigers. The Lumberjacks, who entered the matchup at 6-3, lost to UTEP, UTSA, and SMU earlier in the year, but hung tight with the Tigers in the first half and went into the locker room down six. Considering the unlikelihood of a monumental upset, defensive end Amad Murray did everything he could to put his team ahead and left it all out on the field.

Early in the second quarter, ahead 14-7, Memphis ran a standard draw play for a decent gain. After the play, Murray and Tigers offensive lineman Manuel Orona-Lopez got to jarring with one another. Murray gave him a little bit of a shove, and Orona-Lopez didn’t take too kindly to the gesture, getting back up in his grill. He went helmet-to-helmet with his opponent and made slight contact. Watch the two on the right yard-line above the Memphis logo.

What transpired was absolutely hilarious. Upon the slight tap, Murray sends himself backward with his arms and legs sprawled, trying to draw the foul on the flop. Even though he was barely touched.

Orona-Lopez, who obviously did not commit a penalty, could not be more confused while Murray lays on his back and pleads his case. It gets funnier every time.

Murray did not get the call, as the flag was for holding on the other side of the line, but he put himself in the mix for this season’s best flop. He will contend with Marshall Big Ugly Wil Ulmer for the prestigious title.