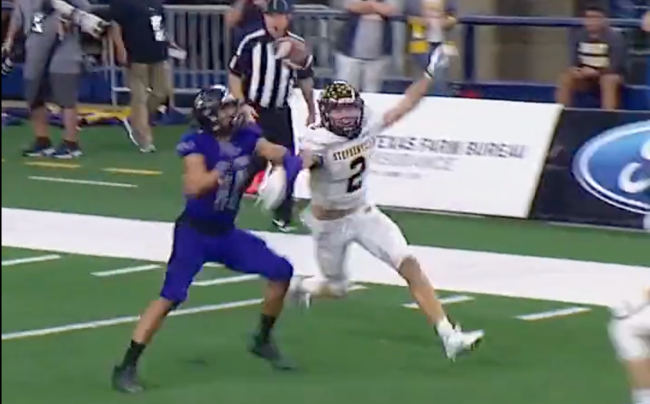 Stephenville High School just scored one of the craziest touchdowns that you will ever see. It came during the third quarter of Thursday’s Texas 4A State Championship game and helped propel the the Yellow Jackets to a 38-21 win over Lyndon Baines Johnson Early College High School.

Facing 1st-and-10 from the opposing 33-yard-line, quarterback Ryder Lambert dropped back in the pocket and looked deep downfield. One of his receivers appeared to have a step on the coverage and Lambert threw a deep ball into triple coverage.

It did not work out in his favor and it was intercepted by a Jaguars defensive back. However, the play took a 180 turn in favor of Stephenville.

As the LBJ defender returned the pick from his own two-yard-line, Stephenville’s wide receiver Coy Eakin stuck with the play. He turned back up field, snuck up on the defensive back and punched the ball loose.

Rather than the fumble hitting the ground, it hung up in the air around the 10-yard-line. It just so happened that Stephenville receiver Kallan Kimbrough was also at the 10-yard-line with outstretched arms.

In a complete change of luck, the ball fell right into Kimbrough’s chest and he took it in for six. The entire play, from start to finish, was bananas.

Touchdown Stephenville! You have to see it to believe it! @CoyEakin forces a fumble after an interception and @SvilleYJFB recovers and scores! Stephenville leads Austin LBJ 31-7 with 10:54 remaining in the 3rd quarter! #UILState #ihss pic.twitter.com/HZ9qXiuizl

Just for good measure, here is how the replay looked on the jumbotron at AT&T Stadium in Arlington:

COY EAKIN!!!! @CoyEakin doing everything for Stephenville!! LBJ with the pick but Coy punches it out and into the hands of Kallan Kimbrough for the @SvilleYJFB touchdown!! Jackets lead 31-7 in the third quarter #txhsfb #UILState @MaxPreps @SportsCenter pic.twitter.com/Ap73KadVta

Eakin’s involvement in the bizarre, chaotic score was not his only play of the night. The 6-foot-3, 185-pounder went for 187 yards and four touchdowns as well.

He made this great one-handed grab to open the scoring:

ARE YOU KIDDING ME, @CoyEakin!?!

Eakin followed it up with a rushing touchdown.

Coy Eakin is doing it all for @SvilleYJFB 😅

And then he straight-up ran through a dude for six.

COY EAKIN IS A BEAST.

Eakin also Mossed another one of LBJ’s corners for his fourth touchdown.

If that all wasn’t enough, Eakin added a game-sealing interception on defense.

Who else?! Coy Eakin picks off Gordon in the end zone and Stephenville will take over. Jackets lead LBJ 38-21 with 3:15 left. @SvilleYJFB @CoyEakin #UILState pic.twitter.com/Lms6JZfnck

When the clock hit zero, he and his teammate celebrated with an awesome between-the-legs dunk handshake.

He spoke with the media after his unreal performance and had the following to say:

"We're all a family, so we play like a family."

What a tremendous day for the do-it-all junior from Stephenville!