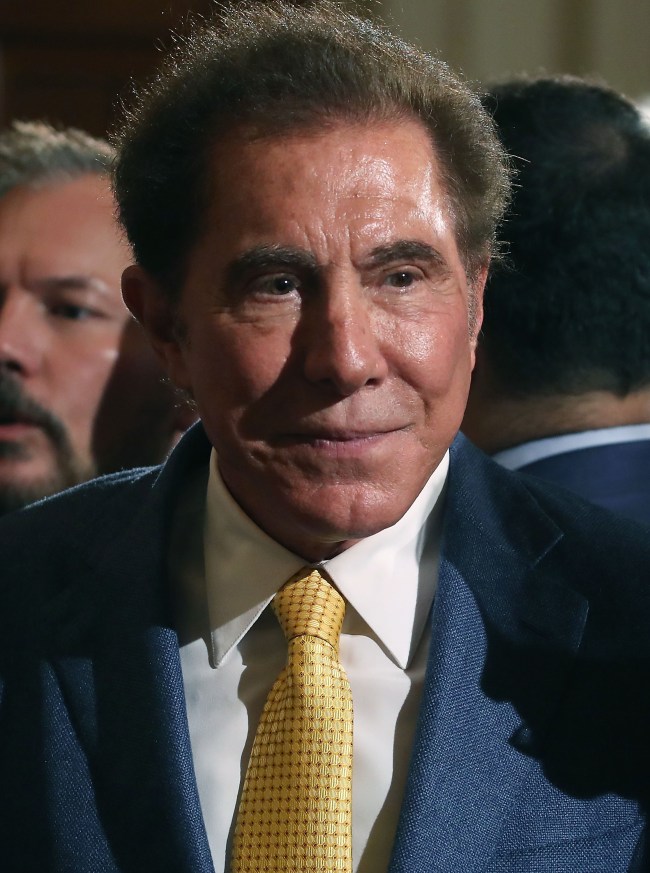 WASHINGTON, DC – JULY 26: Steve Wynn, CEO of Wynn Resorts, attends a news conference held by U.S. President Donald Trump in the East Room of the White House July 26, 2017 in Washington, DC. The president was touting a decision by Apple supplier Foxconn to invest $10 billion to build a factory in Wisconsin that produces LCD panels. Foxconn said the project would create 3,000 jobs, with the “potential” to generate 13,000 new jobs, according to published reports. (Photo by Mark Wilson/Getty Images)

Wynn Resorts (WYNN) chairman and CEO Steve Wynn has been accused of sexual misconduct by multiple women. The allegations, spanning several decades, include charges that Wynn pressured employees to engage in sexual activity. WYNN says the claims are part of a smear campaign related to his divorce and orchestrated by ex-wife Elaine Wynn, seeking a revised divorce settlement. While Steve too has personally denied the allegations (calling them preposterous), it’s been reported that a former manicurist received a $7.5 million settlement (personally paid by Steve, not WYNN) after being forced to have sex with the billionaire casino mogul. Shares of the hotel & casino operator declined -10.2% (down to $180.29 at Friday’s close), following news of the allegations.

Howie Long-Short: A recent WYNN securities filing stated, “if we lose the services of Mr. Wynn, or if he is unable to devote sufficient attention to our operations for any other reason, our business may be significantly impaired”; a viable concern after watching the falls of Roger Ailes and Harvey Weinstein. Should Wynn be forced to resign (no succession plan is in place), gaming analysts believe the stock could drop another 10%; having assigned a 20% “Wynn premium” to the stock’s value. Earlier in the week the company hit a 3-year high ($201.99), following release of an earnings report that reflected a 184% YOY increase in profits (revenue was up 30% to $1.69 billion) during Q4 2017.

Fan Marino: If the Massachusetts Gaming Commission (they’ve opened an investigation) substantiates the allegations, WYNN’s unlikely to receive a gaming license in the state. That’s a big deal with the company working on the biggest private construction endeavor in state history. Commission spokeswoman Elaine Driscoll is on record saying, “integrity of our gaming licensees is of the utmost importance”, indicating potential findings by the enforcement bureau pose a serious threat to the $2.5 billion Boston Harbor resort & casino project scheduled to open in 2019; particularly noteworthy with legalized sports betting likely to become reality before the end of June.

The MLBPA has filed an official complaint with Commissioner Rob Manfred citing concerns that the Miami Marlins and Pittsburgh Pirates are in potential violation of the league’s revenue-sharing agreement; with both teams having actively worked to reduce their payrolls this offseason. While the league’s CBA does not include a salary cap nor minimum teams must spend on on-field talent, it does include provisions that require recipients to use shared proceeds (each franchise pays 31% of local revenues into a fund that is then distributed evenly amongst the teams) towards the betterment of their franchises. The league “does not have concerns” regarding compliance with the agreement and does not intend on filing a grievance against either team. They argue the Pirates have “steadily increased their payroll over the years” and “decreased their revenue sharing” take; while noting the Marlins new ownership group acquired a franchise that “incurred substantial financial losses the prior two seasons” and will lose money in 2018, despite a reduced payroll and the shared revenue.

Howie Long-Short: The Marlins and Pirates are the most obvious offenders, but decreased spending is trending league-wide. While some allege collusion (though no hard evidence exists), it seems evident that the competitive balance threshold (CBT) is being used as a soft cap; both Dodgers and Yankees officials have acknowledged they would have spent more this offseason had the CBT been higher. To fully comprehend why baseball’s middle class is being financially squeezed, you must also consider that an estimated 1/3 of the league has no intention of competing for 2018 World Series (i.e. rebuilding); further reducing the potential pool of free agent dollars available.

Fan Marino: 100+ free agents remain unsigned including stars Eric Hosmer, Yu Darvish and Jake Arreita; so, Dodgers Closer Kenley Jansen verbalized what a lot of other players are likely thinking, “maybe we have to go on strike.” The league hasn’t had a work stoppage since the ’94 season and the owners will look to avoid a strike at all costs (it took McGuire/Sosa chasing Maris for the fans to return); with one league executive indicating they may even be willing to issue financial concessions to the union prior to the expiration of the current deal (December ’21), in exchange for long-term labor peace. That’s probably a good idea; no slugger has hit more than 60 home runs since ’01.

The 60th annual edition of the Daytona 500, NASCAR’s Super Bowl, will be run on February 18th. JohnWallStreet got a chance to speak with Kevin Harvick, who finished 3rd in 2017 Monster Energy NASCAR Cup Series standings, about his relationship with the Busch brand, the details of a promotion that is sending 500 lucky fans to the Daytona 500 and his thoughts on Danica Patrick’s last NASCAR race (editor note: they’re honest).

JWS: Busch has been the title sponsor of your car since the ’16 season. What is it about the brand that made you want to align with them.

Kevin: The unique thing about Busch is they’ve been involved with NASCAR racing since the late 70’s. It’s also a brand that is specific to the age group that I fit in to; they’re not complaining that I’m too old or too young or about the things that I do, it’s just kind of a natural fit. Busch is not a brand with a bunch of athletes all over the place. They’re very focused on racing, hunting and fishing, so our brands are very similar. When you find a great fit like that it’s easy to support the things that they do.

JWS: Busch is running an amazing Charlie and the Chocolate Factory style promotion (you can enter, here), sending 500 fans to the Daytona. Pull a golden checkered Daytona 500 can from an 18, 24 or 32 pack of Busch or Busch Lite and you’ll attend the 60th annual Daytona 500. What exactly does the promotion include?

Kevin: For those of us who know what Charlie and the Chocolate Factory is, right (laughing). It’s not just a ticket to the race, it’s a VIP trip to the race. You get your airfare, your hotel room and an amazing experience at the race track. I know I’ll be at the hotel on Saturday night to spend a couple hours with them (the winners). It’s an over-the-top experience. Busch is all-in.

JWS: NASCAR teams and drivers have struggled to fill sponsorships of late, but Busch is increasing their commitment to the sport. In 2017, BUD grew its value brand portfolio share of category 3.02% within the Daytona Beach market. Why is NASCAR working as a marketing platform for Busch, but not some of their competitors?

Kevin: Busch has made the commitment to not only sponsor the car, but to spend money on the activation side of things; to make sure people know their involvement in the sport, know who they’re involved with. It’s a natural fit with the NASCAR fan because they’ve been involved with the sport for so long and their target market is right in the demographic of who NASCAR fans are. So, there’s several things that make it work, from activation to the race car being on the track; but, a key is wholesalers buying into the program and helping to promote in those local markets. You’ll see that in Daytona, the Bowler family (runs Daytona beverages) does a great job activating and helping Busch in that market. Another piece is the appearances at Kroger’s, Walmart & Sam’s Club; the in-store activations go hand-in-hand with the wholesalers to increase your buys.

Howie Long-Short: AB InBev (BUD) had a strong start to 2017 (or at least one that beat analyst estimates), but “soft sales in the U.S.” resulted in a 1.2% volume decline in Q3. Sales to wholesalers dropped 3.4%, with sales to retailers declining 6.4%. The good news? BUD grew global revenue 3.6% (to $14.7 billion) despite 2 September storms that negatively impacted shipments to Florida & Texas.

Fan Marino: The 2018 Daytona 500 will be Danica Patrick’s last NASCAR race (yawn). Does she get too much promotion?

Kevin: Look, Danica survived off publicity, that’s how she got here. She was very popular and had the opportunity to come to NASCAR with sponsorships and made a lot of money; but, in the end, performance trumps the marketing tool. I think you now see that with the quality and the team she’s going to come back and run the Daytona 500 with. The opportunities are a lot less than what she had. I don’t think she gets too much publicity, she’s done things inside of a race car that no female has ever done; but when you are in sports, you must perform. Black, white, girl, boy, it doesn’t matter, at some point that performance is going to matter; in the end, I think that’s the road it went down with Danica.