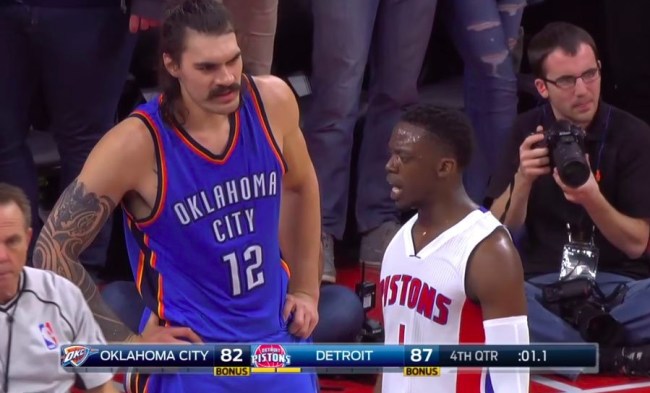 When Reggie Jackson was traded from the OKC Thunder to the Detroit Pistons in 2015, the Thunder organization didn’t had a candlelight vigil for his departure. A disgruntled Jackson pissed a lot of Thunder players off with his perceived “me first” attitude. Russell Westbrook went on the record to say OKC can win a title with or without him. Durant said  that everyone on the team wanted to be there except Jackson (oh the irony in hindsight).

Steven Adams shading Reggie might be my favorite part of the book so far 😂 pic.twitter.com/jR4UBLb5jU

Adams’ first point of contention occurred when the Thunder faced the LA Clippers in Game 5 of the second round of the 2014 NBA playoffs. The ball deflected off Jackson’s hand, but the Thunder got the ball back because replay showed Jackson was fouled by Matt Barnes.

“As for the controversial out of bounds call given to us that everyone says went off our guy Reggie Jackson’s hand? I couldn’t possibly comment. Reggie was in a three-on-one fast break situation and chose to take it hismelf instead of passing to KD or Russ. That’s far more controversial to me.”

An indicator that Jackson lived in a world of his own came when he believed he deserved to start over Russell Westbrook.

“When Russ came back from injury and took over the starting spot again, Reggie wasn’t happy. We were just looking at him thinking, ‘You’ve got to be some kind of fool to seriously think you should be starting over Russ.’ But that’s exactly what he thought, and that kind of thinking went against everything the Thunder was about. Yes, we competed in practice and fought for the starting positions, but once the actual game starts we all do whatever is required of us, no matter how much or how little.”

“When the trade deadline got near, we knew Reggie wanted to leave. And because we knew he wanted to leave, we wanted him to leave as well. Why would we want to work every day with someone who wanted to be somewhere else? When he was finally traded to the Detroit Pistons, we forgot about him pretty quickly because we had new guys to welcome to the team.”

After Jackson was traded to the Pistons, he and Adams exchanged words at the end of a Pistons victory over the Thunder. He then proceeded to incite the home crowd to rub it in his former team’s face.

Here's the chat Steven Adams & Reggie Jackson had at the stripe at the end of the game. Plus Jackson's celebration. pic.twitter.com/gAJtA5QDql

This speaks to me:

My least favorite player in the league is Reggie Jackson, and it's not even remotely close. Steven Adams calling him out in his book, pulling no punches…I think this is what I imagine heroin might be like.