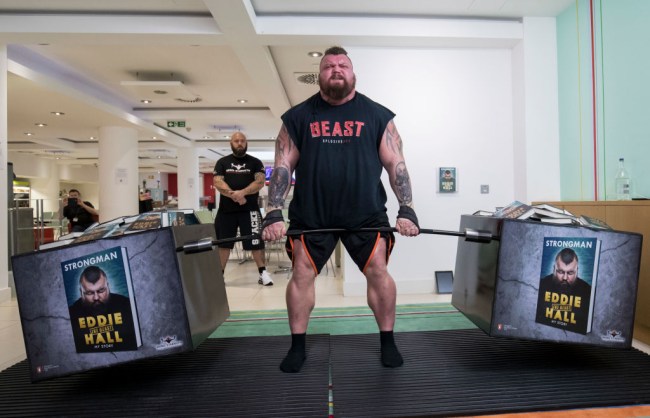 This article deserves a trigger warning because it is not for the faint of heart. UK strongman Eddie Hall tells the story about the time he dropped weights on his penis and nearly bled to death. Thankfully, he lived to tell the frightening tale.

Eddie Hall won the World’s Strongest Man in 2017 competition and was named the strongest man in the U.K. 13 times. However, Hall’s incredible feat of strength may have come when he dropped weights on his penis and was strong enough to drive himself to the hospital.

Hall told the harrowing story to The Mirror.

“I piled a load of heavy weights on a leg-press machine and then heard a loud thud,” Hall explained. “It had come crashing down, and the weights had landed on my penis.”

“I nearly bled to death,” Hall said. “It was bad. The worst ever.” React with screaming in excruciating pain GIF here.

But the 31-year-old strongman didn’t cry to his mommy, which would have been a perfectly expected reaction to this kind of torture, he drove himself to the hospital, bloody manhood and all. “I didn’t cry for help though. I just lifted them off, drove myself to hospital, and got stitched up.”

“I was back training soon enough,” Eddie said. That sounds like a career-ending injury or at least a reason to never ever use the leg-press machine ever again.

This isn’t the first time Eddie’s naughty bits got close to the weights. Eddie lifted weights with his bollocks. In September, The Beast and UK TV presenter Paddy McGuinness lifted kettlebells with their balls. Did Eddie not learn his lesson about the dangers of putting his meat and potatoes too close to weights?

Also in the interview, the 400-pound strongman from Newcastle talked about the massive amount of food he eats. “On average I eat 8,000 calories a day,” he said.

But wait, that was just food for breakfast number one. “Then a second breakfast of porridge and about five portions of fruit.”

“I snack all day on cashew nuts and beef jerky, and lunch will be steak or chicken with rice, pasta, and veggies and half a family-sized cheesecake for pudding,” he continued.

“Then I have a steak and rice meal, then the evenings get hefty,” Eddie said of his dinner. “Spaghetti bolognese or a curry and the other half of that cheesecake to polish it off.”

Eddie is a big boy to say the least and apparently he has destroyed couches with his immense frame. “I’ve broken a few sofas in my time. I plonk myself down my friends’ sofas, and often they split straight down the middle,” Eddie said. He also said he has broken hotel beds.

You can read the entire Eddie Hall interview over at The Mirror.