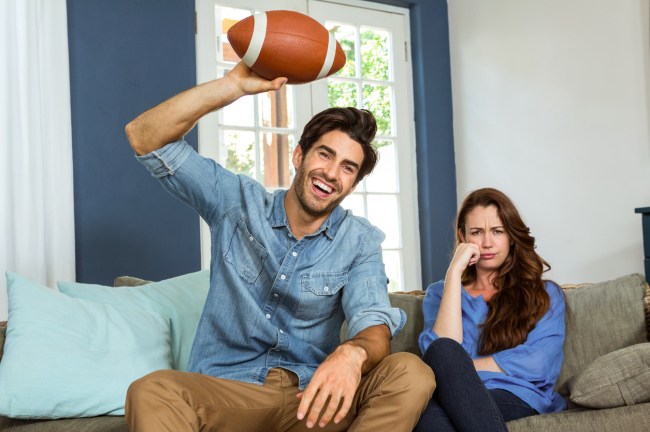 Hypothetical: You walk into your place Sunday afternoon after picking up a 24 pack of O’Douls for the big game. You even threw money on your team so you have an extra dog in the fight. You’re cutting it close to the start of the game and you still need to crush four beers and 14 pigs-in-a-blanket to uphold some fucked up superstition you abide by.

You walk into the bedroom to get your beer funnel and your lady is wearing a pink lingerie contraption of some sort, giving you the do-me eyes, with handcuffs laying over her bosom. It’s your anniversary you forgetful asshat. You hear Cris Colinsworth’s screechy voice in the background and he announces the kickoff. What do you do?

a.) Engage in sweet, sensual love to the woman who has sacrificed so much for you over the years.
b.) Toss her a $25 Pinkberry gift card, handcuff her to the bed, and head downstairs to watch the game.

According to a survey of 2,000 people done by the folks over at Fathead, 1 in 5 sports fans would choose option B, to turn down sex to watch the game. It’s better to ask for forgiveness than permission, my friends.

Here are some interesting findings from the survey that sought out to examine how sports affects relationships:

To change their partners interest in sports, men would sacrifice the following:

1 in 3 women has pretended to like a sport to please a potential romantic partner.

Men obviously have their priorities straight: 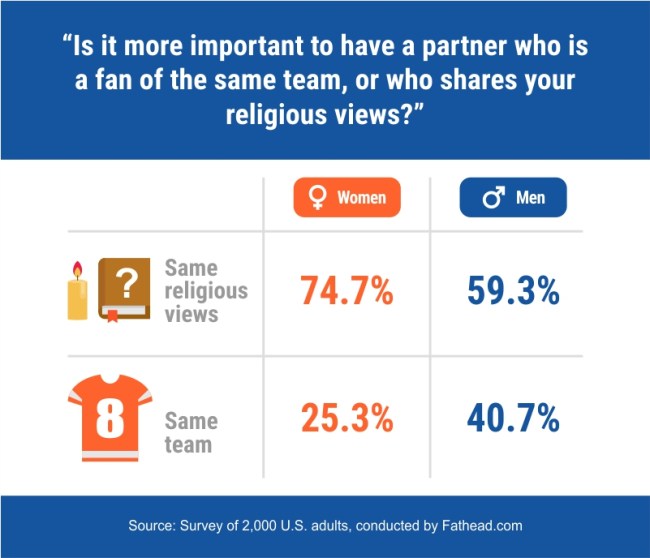 Check out the entire study over at Fathead.