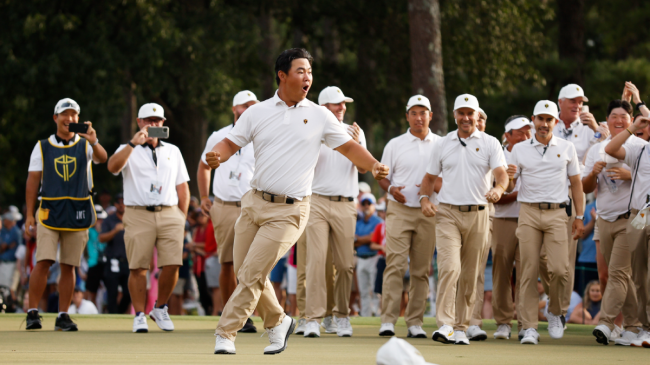 Sungjae Im is proving you can still have fun on the PGA Tour, no matter what those LIV Golf guys say. The South Korean recently participated in the Presidents Cup in Charlotte, NC, playing for the International team.

Team USA eventually won the event, taking down their foe 17.5 to 12.5. The International team might’ve been at a disadvantage with so many popular players defecting to LIV throughout the course of the season, most notably No. 2-ranked Cam Smith. The Americans have now taken 12 of the last 14 editions of the tournament, including having won nine in a row.

But the International team wasn’t letting the setback keep them from enjoying the post-tournament festivities.

At the Presidents Cup after party, Im was seen getting down on the dance floor. He broke out the once viral “Gangnam Style” moves in a video posted by fellow PGA player Tony Finau.

Fans were quick to react to the hilarious jig, and they’re posting their reactions online.

After the final round on Sunday, both sides took to the clubhouse for an after party. That’s when we saw Sungjae Im pull out that ‘Gangnam Style’ move in front of everyone in attendance.

Sungjae Im knows how to bring the party 🕺 pic.twitter.com/lAjuRmOpK6

They weren’t the only ones talking, though. Here are some of the best Twitter reactions to seeing the celebration.

This fan wrote, “When that 3rd Michelob seltzer kicks in…”

When that 3rd cucumber lime Michelob organic seltzer kicks in…

Another golf fan posted simply, “Sungjae Him,” a clever play on the golfer’s last name.

Golf Central’s media account got in on the fun, too, saying, “If you need a smile today, you’ll get it watching this… Sungjae Im bringing the house down to Gangnam Style.”

If you need a smile today, you’ll get it watching this…

😎 Sungjae Im bringing the house down to Gangnam Style