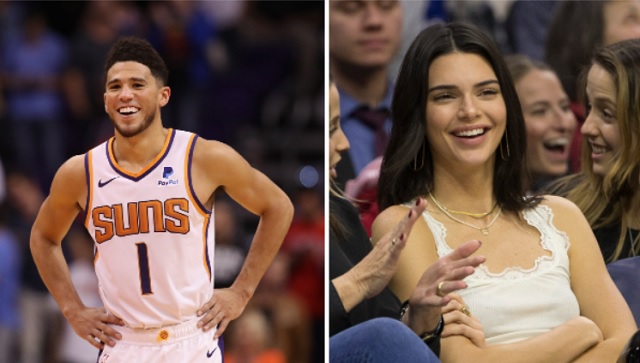 Devin Booker’s relationship with Kendall Jenner is blossoming after the Phoenix Suns star returned home from the NBA bubble.

Less than a week after being spotted at dinner with Jenner, the NBA star was seen getting close with the reality TV star at the beach.

TSR STAFF: Tanya P.! @tanyaxpayne _____________ #TSRExclsuivePhotos: #Roommates, issa beach baewatch! Y'all know #KendallJenner is known to keep a FIONEEE NBA player around her, and this time she snagged up Phoenix Suns' star player #DevinBooker! The pair have been keeping things pretty low key, especially since he's been in the NBA bubble competing for an NBA championship. However, now that his team has been eliminated despite Devin's best efforts, he wasted NO TIME to go right back to Los Angeles and be with his bae, Kendall. 👀👀 _______________ The pair showed off their summer bodies at the beach in Malibu where Devin and Kendall were both seen packing on the PDA while they enjoy what's left of summer. Check out all of the photos & get the tea about Devin by clicking the link in our bio! 😏 (via: Back Grid)

“Before he left for the NBA bubble he was part of her bubble and then the whole time he was away they kept in touch and now that he’s back they’re spending a lot of time together again,” a source shared with HL. “It’s working for now but part of the reason for that is she’s actually got the time to put into it,” the source revealed. “Usually her life is so busy she doesn’t really have the time to give to anyone else but the pandemic has made her slow way down. She seems to be very happy and he’s absolutely a part of that.”

Kendall and Devin have, according to our sources, bonded quite a lot, too. Between the two being total dog people and admiring each other’s success, they seem to be headed towards something more than just friendship. “[Devin] is very excited to see what happens next,” according to another source, adding that he “is happy that he has tons of time to make things even more serious.”