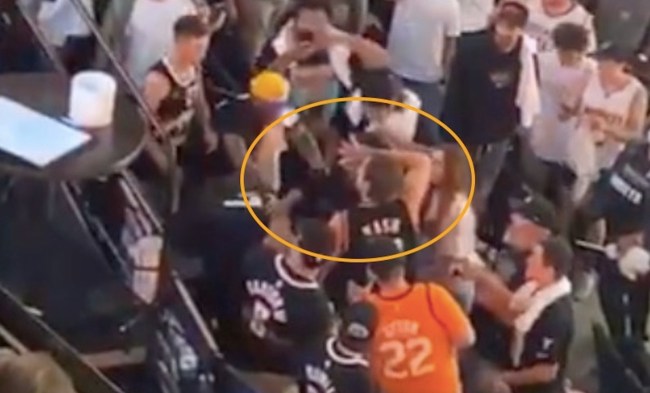 I covered the “Suns in 4” fight when it unfolded on Saturday. Basketball, let alone fights at basketball games, is admittedly well outside my wheelhouse. After all, I’m the movie guy here at BroBible. I’ve always said one of my greatest strengths is knowing what I don’t know and being happy to admit it.

But what I *do* know is the internet. I’ve been doing this — writing on the internet for a living — for five years now, which is essentially a decade in Internet Years. Think about it: on this day five years ago, Donald Trump hadn’t even been elected President yet. That’s a lifetime ago!

And in those five years, I’ve seen scraps and scruffs and showdowns of all shapes and sizes. Teenagers in the high school parking lots and chicks in a club bathroom. Former professional athletes and average joes. I’ve seen them all. And the second I soaked in “Suns in 4”, I just knew — my soul sang — that it would be a first-ballot entry into the Internet Fight Hall of Fame. I literally titled the article “Not To Over Exaggerate But This Is One Of The Best Stadium Fights I’ve Ever Seen”.

In the days since, coinciding with the as-promised sweep of the Nuggets, “Suns in 4” has achieved such notoriety that the team’s superstar Devin Booker sought the fan — neigh, the legend — out on social media. Luckily for us, that inquiry has provided us with an alternate, bird’s-eye-view of the instantly legendary ass-kicking.

The Phoenix Suns, who did, in fact, win in four against the overmatched and outgunned Denver Nuggets in the Western Conference semifinals, will take on either the Utah Jazz or the Los Angeles Clippers in the Western Conference Finals. Now that Suns In 4 Man has linked up with DBook, hopefully, he’ll have courtside seats to the series, as he’s now effectively the team’s mascot. SUNS IN 4EVER.