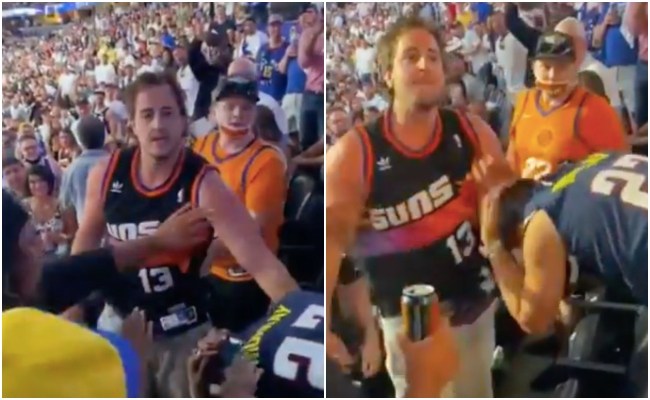 I’m no Stadium Fight Encyclopedia, but this brief yet electric bout at Game 3 of the Western Conference semifinals between the Denver Nuggets and Phoenix Suns on Friday night ranks up there with the best I’ve seen thanks to a handful of key moments that we’ll break down below.

I say this as someone who grew up in prime Jersey Shore-era New Jersey: just stop it.

My man seems to be havin’ a pretty good time. His buddy is taking the brunt of the damage, anyway. Too much fun, in fact, as it was likely in this moment of misinformed confidence that led to the following fatal decision.

The Fight Gods decided this dude’s fate the moment he went dead-eyed in an attempt to sneak in the sucker punch. Like a child trying to trick their Mom into thinking they’re asleep.

The Absolute Domination by the Hero

While the beginning of this encounter was unfortunately not caught on camera, context clues tell us that the Suns’ fan is, in fact, the hero of this story (more on that later). And our hero absolutely dominated from the jump, almost instant recovering from the attempted sneak attack to unleash a flurry of right crosses to the Sucker Puncher’s dome. Not to mention he appears to have Sucker Punch’s chain in a death grip, giving him such total control over the situation that he’s able to dole out some punishment and talk further shit to the little guy.

The “Suns in Four”

It’s impossible to become a  good internet fight unless A) blood is drawn or B) the loser is humiliated and this one’s got both.

Despite clearly being the road team, the Suns fans seem to have the crowd on his side.

This is what I meant by the Suns’ fan being the hero: you’d think, after laying the smackdown on one of their own, that Nuggets fans would be either getting involved themselves or calling security. Booing, at the very least. Instead, he gets applause and daps. That’s how any good story should end: triumph.