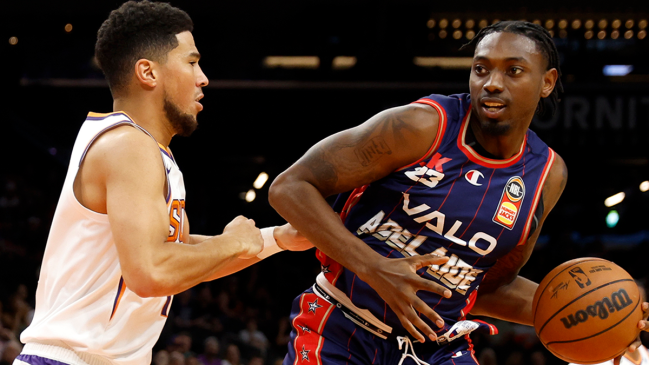 The Phoenix Suns had one of the best seasons in franchise history last year after racking up 64 wins and finishing at the top of the Western Conference eight games ahead of the second-place Grizzlies, which led to them being viewed as top contenders to take home the Larry O’Brien trophy for the majority of that campaign.

Unfortunately, the team was unable to secure a spot in the NBA Finals for the second straight year. While they initially put up a fight against the Mavericks, they were eliminated from the postseason following a borderline infamous showing in Game 7 of their Conference Semifinals showdown where Dallas walked away with the win in a 33-point massacre.

The Suns didn’t make any major roster changes in the offseason and were able to sign Devin Booker to a $214 million supermax extension that will theoretically keep their biggest name in Phoenix for the next three years. As a result, you have to imagine expectations are fairly high heading into this season—although the team did run into a slight hitch while gearing up for it over the weekend.

On Sunday night, the Suns hosted the Adelaide 36ers of the National Basketball League at the Footprint Center in an exhibition game where the Australian team that traveled almost 8,500 miles for the contest managed to earn a 134-124 victory.

The Phoenix Suns just lost to the Adelaide 36ers

It's the first time an NBA team has lost an international exhibition game since 2016, and only the fifth time in the last decade pic.twitter.com/dBTvYIat9y

It’s obviously worth noting Booker, Chris Paul, and the rest of Phoenix’s starters were all limited to 22 minutes on the floor, and it would be foolish to jump to any conclusions based on the result of a preseason game regardless of who the opponent was.

However, that didn’t stop plenty of people from pouncing on the chance to have some fun at the expense of the Suns.

That includes those who pointed out the 36ers (who came into the game as 29.5-point underdogs) aren’t even much of a threat to their fellow NBL squads.

The Suns just lost to the Pistons of the NBL pic.twitter.com/EiUgz6OIsw

The suns just lost to a D3 basketball team..

However, the mockery didn’t end there.

Warriors flew half way across the world to Japan. Hosted events, took pics at sites, practiced & won both games vs an NBA Team

Suns are improving at least. Last game they lost by 33