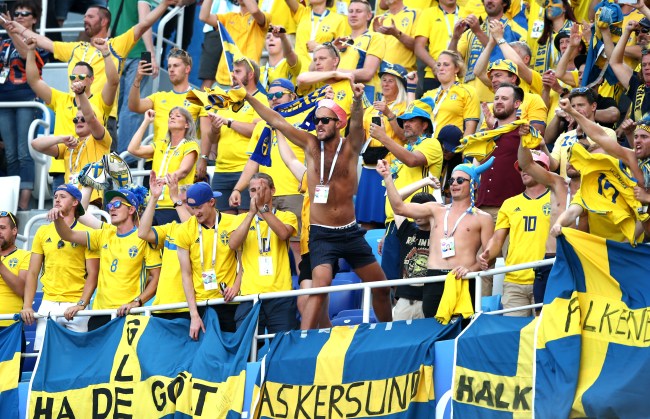 The last time Sweden won a World Cup game, Crash won the Academy Award for Best Picture, Enron was on trial, Britney Spears and Kevin Federline were in the midst of a divorce, and, okay you get the picture. It’s been a while. Twelve years in fact.

Well that slump ended yesterday thanks to the foot of captain Andreas Granqvist. The 33-year-old helped Sweden secure three points and a win in his team’s World Cup Group F opener against South Korea when he drilled a penalty-kick goal in the 65th minute, giving Sweden its first WC goal in twelve years and putting them atop Group F with Mexico.

According to Lee Roden at the Local Sweden, fans in Nizhny Novgorod, Russia (the city that hosted the match) drank the entire town dry after the historic win. And by drank the town dry, I mean the watering holes in the city were all completely out of alcohol.

It should be noted that the city of Nizhny Novgorod were already running low on supplies, as they collectively underestimated how much the World Cup caused fans to drink, whether it be the result of anxiety, celebration, or sadness.

“Yup, some places had already run out by yesterday. The city has never had to arrange something on this scale before, so they’ve been completely taken by surprise,” Swedish Football Association’s head of security Martin Fredman said.

But once Sweden won, the city stood no chance…

Sweden will play its second match of the group stage against Germany in Sochi on June 23.