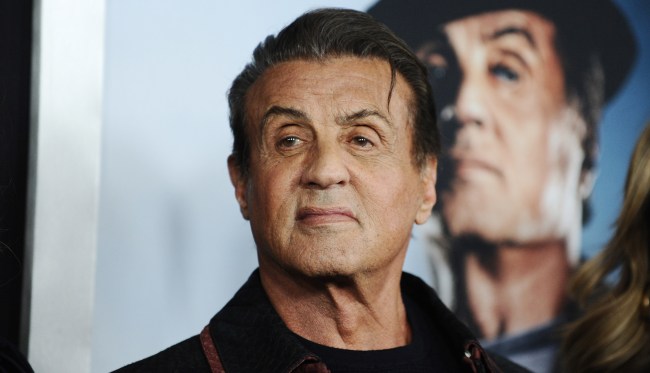 Sylvester Stallone, who not only plays fighters in movies, is also a minority owner of the UFC, says he is worried about Conor McGregor after his recent arrest and has some advice for the fighter.

As you may have heard, last week McGregor was arrested in Miami after grabbing a man’s cell phone, throwing it on the ground and stomping on it.

McGregor was charged with felony strong-armed robbery and criminal mischief, but didn’t seem too concerned as after he was released he was selling the t-shirt he wore when exiting the jail.

He did admit in the caption to the photo above, “Patience in this world is a virtue I continue to work on. I love my fans dearly. Thank you all.”

Speaking to TMZ Sports, Stallone, one of McGregor’s biggest fans, says The Notorious One is at a crossroads.

Stallone said McGregor needs to tell himself, “Okay, I’ve gone through a very rough time. I’ve been somewhat publicly humiliated. I’m at a crossroad in my life … I have to overcome an incredible opponent who seems invulnerable.”

“So this is a crossroad in his life. This is probably the most important one because if he doesn’t live up to his ideal … if he can’t overcome his fear and beat this man, I think it’ll plague him for the rest of his life,” Stallone continued.

Sly does think McGregor has it in himself to come back and beat Khabib, but…

“I think [Conor] lost last time because he got resentful, he got prideful, he got arrogant … put his hands down … walked right up to that gentleman and he just got smashed in the face when he could have been defensive. There was no Plan B. Not even a Plan A minus.”

When it comes to future fights, Stallone said he wants to “see a guy that leaves everything on the table because that’s what you call a champion.”

As for what he would tell McGregor about dealing with the public, “Keep smiling. You can’t critique a smile.”