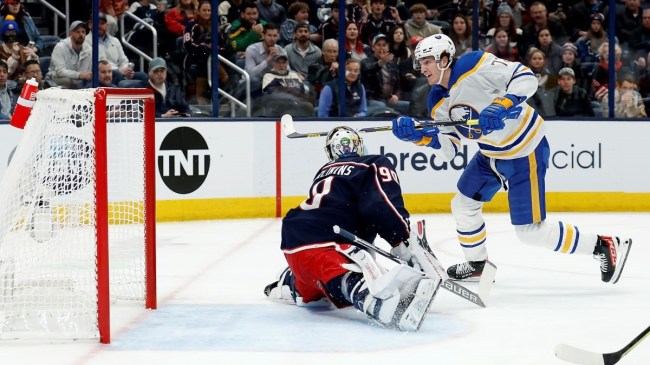 The Buffalo Sabres have been one of the worst teams in the NHL over the last decade. The Sabres have not made the NHL playoffs since the 2010-11 season, and have finished last in their division five times since then.

But this year, things are looking up for Sabres fans. Sure, Buffalo still sits seventh out of eight teams in the Atlantic Division. But the Sabres are stacked to the kills with young talent that has made them one of the NHL’s most watchable teams in the early season.

But it was Thompson, specifically, who stole the show on Thursday night against the Columbus Blue Jackets.

The 25-year-old American had a breakout season a year ago. After not scoring more than eight goals in any of his first three NHL seasons, he bumped up to the Sabes’ first line and had a massive year. Thompson turned in 38 goals and 30 assists, establishing himself as a top-line talent.

This year, he’s taken his game to yet another level.

Unlike the Sabres, the Columbus Blue Jackets are trending in a downward direction. Columbus made the playoffs four straight years between 2017-2020. But they’ve missed each of the last two seasons and currently sit in last place in the NHL Eastern Conference.

The Sabres, and Thompson in particular, took advantage of that on Wednesday night.

ALL 5 GOALS FOR TAGE THOMPSON pic.twitter.com/4Lc9DWzqkp

But the insane numbers don’t stop there. Thompson’s five goals on Thursday were more than the large majority of the league has scored all year.

Tage Thompson has more goals tonight than 73% of players in the league have goals this season.

Thompson now has 21 goals and a jaw-dropping 40 points through just 26 games this season, and the Sabres have a bonafide superstar on their hands.

Hold on, Tage Thompson now has the 4th most skater points in the NHL this season???

Things might just finally be looking up in Buffalo.