Are The Buffalo Sabres The Worst NHL Team In History? Here’s What The Numbers Say 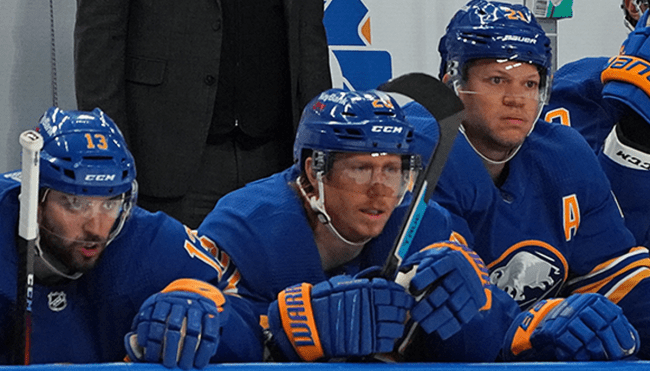 The Buffalo Sabres came into Monday night’s game against the Philadelphia Flyers rocking a 17-game losing streak, but after heading into the third period with a 3-0 lead, it looked like there was a very good chance they might be able to avoid earning a spot in the history books by tying the 2004 Pittsburgh Penguins for the proud distinction of the team with the most consecutive losses in NHL history.

More specifically, the Buffalo Sabres had a 96% chance of winning at three different points in the contest before learning why three goals is actually the most dangerous lead in hockey the hard way.

The Sabres had a 96% chance to win at three different points in the third period. Provorov buries the OT winner. Flyers 4-3. Sabres are tied for 1st place with the 04’ Pens record of 18 consecutive loses. pic.twitter.com/vqvbSfpYfE

When everything was said and done, the Flyers came away with a win in overtime and the Sabres will have the chance to truly cement themselves as one of the worst teams the NHL has ever seen when the two squads face off against on Wednesday—which begs the question: Is this year’s Buffalo team in contention to be the worst in NHL history?

Before diving into the numbers, I’d like to briefly provide a bit of context in an attempt to explain how the Sabres hit the rock bottom they’re continuing to take a jackhammer to every single time they step out onto the rink. In order to do that, we need to go all the way back to 2011, which is when current owners Terry and Kim Pegula purchased the franchise and the former held a press conference where said he the team’s new “reason for existence will be to win a Stanley Cup.”

It was a take that ended up being as freezing cold as the ice the Sabres play on, as they haven’t even secured a spot in the playoffs since the Pegulas took over. Despite what he said, their raison d’etre over the past 10 years has been to make life even more miserable for Buffalo sports fans who already had a reliable source of disappointment in the form of the Bills (a franchise that was added to the Peluga’s portfolio in 2014.)

The Sabres have spent the bulk of the previous decade undergoing a perpetual rebuild, and while their consistent mediocrity has allowed them to garner a number of top draft picks, they’ve been unable to capitalize thanks to prospects who failed to live up to their potential and wasted talents like Jack Eichel and Rasmus Dahlin, who can only do so much when it comes to canceling out the rampant incompetence and dysfunction that’s crippled their team.

The bulk of the blame can be placed on the front office, as there’s been a rotating door of GMs who made some incredibly ill-advised roster moves and coaches who’ve been fired before they’ve really been given a chance to figure out how to turn things around. You also can’t overlook the role Kim Pegula has played, as she’s a notorious micromanager intent on cutting costs at every corner while attempting to oversee the operations of an NHL and NFL team.

So, yes, the Sabres are bad, but just how bad are they? Well, I decided to take a closer look at the statistics and conveniently came across a thread put together by a Reddit user who had the same idea prior to Monday’s showdown. After being nice enough to comb through the data for me, they discovered the Washington Capitals finished the 1974-75 season with a 0.13125 win percentage that’s currently the number to beat. This provided Sabres fans with a bit of a silver lining, as they could theoretically lose every single game that’s left on the schedule and only be tied as the third-worst team in NHL history in that particular category.

Going into Monday’s game, Buffalo did have a chance to set the record for the lowest percentage of possible points earned over the course of a season (a metric that accounts for the introduction of overtime games,) but by managing to come away with a point last night, they can lose out and still not match the truly abysmal number that was posted by that staggeringly terrible Capitals squad.

As a result, the Sabres are not, in fact, the worst NHL team of all time, so at least Buffalo fans can take solace in knowing they’re just one of the worst.