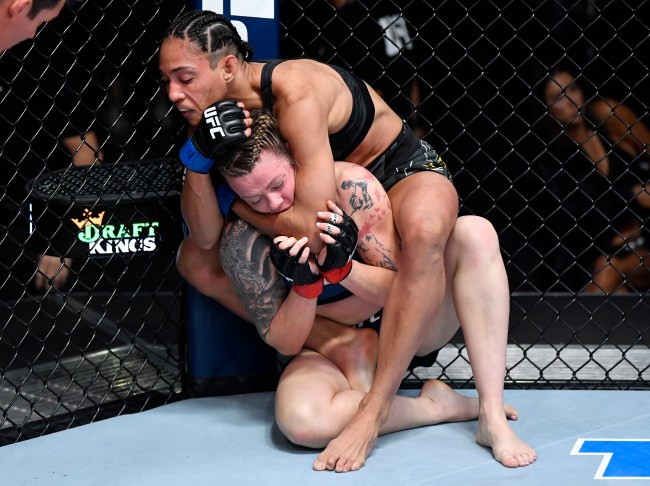 It took nearly 4 and a half hours for us to see the first finish of the night at UFC Fight
Night: Vieira vs Tate, but Taila Santos made it worth the wait. The Brazilian secured a rear-naked choke late in the 1st round to notch her 4th consecutive UFC win and move her record to 19-1.

The fight got off to a slow start, with Joanne Wood using push kicks to the body and to Taila’s lead to keep distance, but Taila started to find her range as the fight progressed. The first time Santos dropped Wood with a big right hand, Wood was able to survive and work her way back to her feet.

[ #UFCVegas43 is LIVE on @ESPNPlus ] pic.twitter.com/F3jAgQ3TDp

The second time was a different story. Late in the 1st round, Santos was able to drop Wood with another big shot. This time, Taila Santos was able to land some more shots on the ground before eventually taking Wood’s back. From there it was only a matter of time before Santos would sink in the choke to get the night’s first finish with only 2 more fights left on the card.

[ #UFCVegas43 is LIVE on @ESPNPlus ] pic.twitter.com/xpOgNXp7mY

The loss for Wood send her tumbling down the rankings after she was within a fight of a title shot. The #5 fighter in the IFC Women’s flyweight division will now have to go back to the drawing board after suffering her second consecutive loss.

The win for #10 Taila Santos should put her right in the thick of contention in the division after beating a top 5 fighter for her 4th straight win. The success of Santos is a great development for a division that has been in desperate need of some new blood for Valentina Shevchenko.

The impressive win establishes Santos as somebody we can expect to stick around at the top of this division for a while.