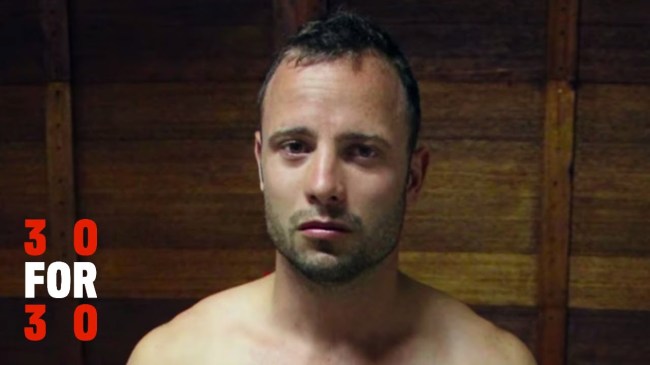 This past weekend, ESPN debuted its latest 30 for 30 documentary masterpiece The Life and Trials of Oscar Pistorius.

The four-part docuseries takes an in-depth look back at not only the infamous murder trial of the famous Paralympic athlete, but also delves into his childhood and the track he took (no pun intended, okay, maybe a little intended) to stardom which culminated in Pistorius becoming the first double-leg amputee to compete in the Olympic Games.

You can stream the full docuseries on ESPN+ right now, along with every single ESPN 30 for 30 ever created.

The documentary leaves very few stones unturned, but there were five key takeaways that I found the most interesting.

Pistorius had a father that reminded me of Todd Marinovich’s dad (who was part of another fantastic “30 for 30”), only with not a hint of love for his son who just also happened to not have any feet.

Oscar’s dad was very clear in not wanting anyone to refer to his son as disabled and felt he should be able to do anything someone with two feet can do. While an admirable notion in theory, a little compassion may have gone a long way when he struggled, both on the athletic field as well as in life.

The culture of South Africa at the time of Pistorius shooting and killing his girlfriend Reeva Steenkamp was one of great fear and was overwhelmingly one where owning and using guns was the norm rather than the exception. Pistorius and others in the film were noted to have carried pistols around tucked into the back of their pants on a regular basis.

Growing up, Pistorius’ family had many guns in the house. His mother even slept with one under her pillow after Oscar’s father and her split up.

Mix that upbringing with the fact that South Africa was still stinging from decades of apartheid which led to the fact that many white people felt an unfounded needed to protect themselves from the boogeyman, i.e. bands of black criminals going around to people’s homes seeking some sort of retribution.

He just didn’t seem like a very great person.

The Length of the relationship

Pistorius and Steenkamp had only been dating for around three months. They began dating in November of 2012, and the shooting took place in February of 2013.

Until watching this documentary one (meaning me) might have assumed that Pistorius and Steenkamp had been in a lengthy relationship.

Knowing that it was actually a very new relationship made Pistorius’ obvious passion for her, saying she was “the one,” and his penchant for allegedly having a strong temper certainly casts some doubt on his version of events.

The rush into a new relationship

The documentary made it sound like Steenkamp was Pistorius’ very rapid replacement for his girlfriend of 18 months, Samantha Taylor, who broke up with him over his cheating, temper and gun issues.

Taylor’s mother even ended up co-writing a book titled “Oscar: An Accident Waiting to Happen” after Steenkamp’s death.

No one sees what you see.. even if they see it too 👀

Throughout the film, it was made very clear that the death of Oscar’s mother when he was 15-years-old created a hole he tried to fill with the relationships he had with women. Pistorius came off sounding like his emotional growth and maturity essentially came to a halt when that happened and that no woman would ever be good enough to fill that hole.

Of course it didn’t help matters that his father appearing to do next to nothing to help Oscar cope with the loss of his mother at such a young age.

This is really a true crime documentary

After a 42-day trial and multiple appeals and resentencing hearings, the only person that truly knows for sure what happened in the home of Oscar Pistorius in the early morning of Feb. 14, 2013 is Oscar Pistorius.

And he isn’t changing his story.