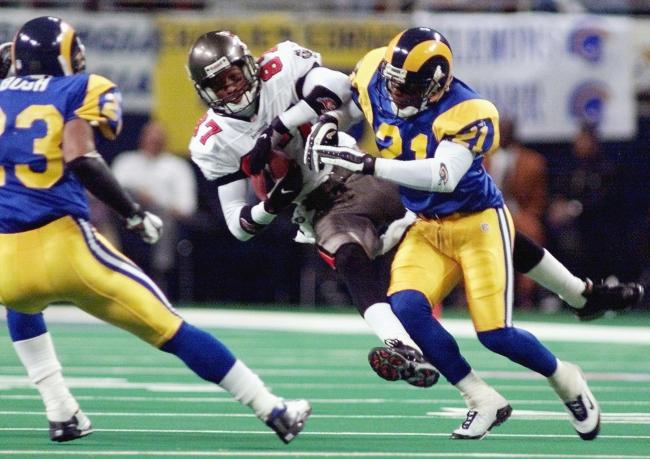 Some wounds just never heal. No matter how much success a franchise has, it will seemingly never be enough to erase the memory of what could have been. The Tampa Bay Buccaneers have won a pair of Super Bowls since 1999, but that doesn’t stop fans and former players from thinking about the one they could have won that year.

It’s not hard to see why it’s a memory that would still creep into their minds from time to time. The manner in which they were eliminated was one that wasn’t going to be easy to get past.

Yesterday, some fans and the quarterback of that Bucs team took to Twitter to talk about this moment of NFL history that isn’t talked about much anymore.

I’ll never forget the feeling I had when this catch was overturned. I was 11 years old watching in a ski chalet in Elocitville, NY. Some context for anyone who wasn’t watching back then. https://t.co/Tkd9liYPDu

With how much we hear about the Dez Bryant catch against the Green Bay Packers, it’s surprising this doesn’t get referenced more. On that broadcast, they knew the call was wrong, but to today’s football fan, the call would seem insane.

It’s no wonder the players involved are still upset about the call.

Now the Tampa Bay Buccaneers have a chance at some measure of revenge. They take on the LA Rams this Sunday for a spot in the NFC Championship Game. This time around, they have the home field advantage and the highly touted offense.

A win in this one might not be enough to completely remove the sting of that controversial call, but it would get the Tampa Bay Buccaneers a little bit of payback and put them just two wins away from their second consecutive Super Bowl.