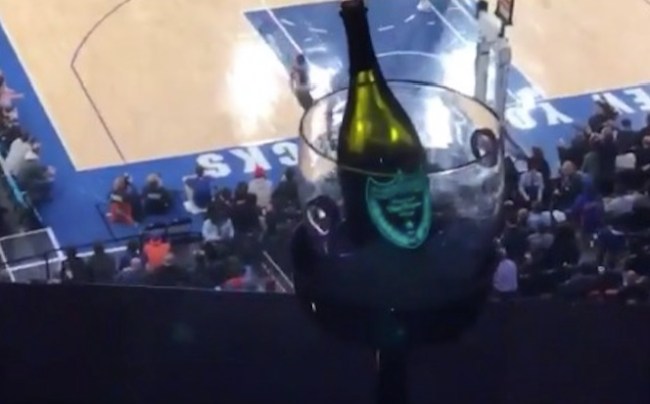 Tao Group’s ‘Suite Sixteen’ at Madison Square Garden is in a class of its own. I’m almost embarrassed to admit it but I haven’t been in too many suites in my day. Maybe 5 or 6 for games. I was lucky enough to tour the suites at Madison Square Garden years ago when they were being built so I got a firsthand look at what the Tao Group’s Suite Sixteen and its competitor luxury suites look like.

Suite Sixteen isn’t one of the Floor Suites at MSG which are unbelievably sick, but that hasn’t stopped it from being the most expensive ticket in sports. For a cool $400,000/year you will get two seats to every event held at MSG. This includes concerts as well as every Rangers and Knicks home game. Madison Square Garden boasts nearly 365 events a year so that $400K goes a long way.

Last night, ESPN’s Darren Rovell tweeted a video from the inside of the Tao Group’s Suite Sixteen where the $400K also gets you a bottle of Dom Perignon champagne to every game along with sushi, steak, and other snacks:

The priciest suite in sports: @TAOGroup’s Suite Sixteen at Madison Square Garden. For $400,000, you two seat at every Knicks & Rangers home game and concerts + a bottle of Dom Perignon champagne for every event. pic.twitter.com/id5puzX3kS

Honestly, I’m shocked that the Tao Group doesn’t own one of the luxury boxes down on the floor at MSG. Most people haven’t seen these because they’re actually hidden below the seats but you emerge to sit on the ice for Rangers games and a little bit behind the benches for Knicks games. These boxes have a water feature or fireplace and are the most luxurious options on the planet.

My hunch is that they’re all occupied by banks and hedge funds. I’m not trying to take anything away from Suite Sixteen, it’s amazing, I’m just shocked that the Tao Group doesn’t have the best possible box in MSG.