NFL Quarterback Reportedly Told Team Not To Start Him This Week 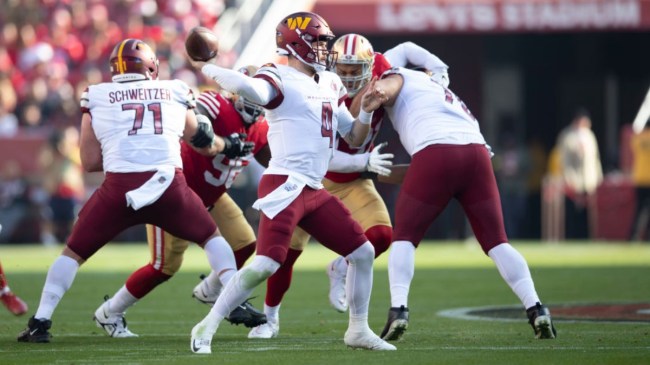 Early this morning, it was announced that the Washington Commanders would be benching Carson Wentz after a disappointing Week 17 performance against the Cleveland Browns.

The expectation at the time was that the team would turn to Taylor Heinicke as the starter in his place and that rookie quarterback Sam Howell would get some snaps as well.

The #Commanders are expected to turn back to Taylor Heinicke as the starter for Sunday’s season finale vs. the #Cowboys, but rookie QB Sam Howell is also slated to play, marking the NFL debut for the fifth-round pick, per source. Barring change of plans, this will be the setup.

It turns out that isn’t the case. Instead, Howell will be the one getting the start on Sunday against the Dallas Cowboys.

Now it appears that decision was made because of Taylor Heinicke. According to ESPN’s Jeremy Fowler, Heinicke received indications that he would get the start and told coaches to that Howell deserved the chance to play the full game instead.

The expectation about which QB would start for Washington shifted from Taylor Heinicke to Sam Howell late this morning, per sources. Heinicke, who had received indications that he was in line to start, believed Howell was deserving of a full game and relayed that to coaches.

It’s a classy move by Heinicke to make sure the rookie quarterback got a chance to play a full game with the team eliminated from playoff contention.

This is also exactly what the Commanders coaching staff should have been planning the whole time.

The team already knows that they’re going to have a tough time making a playoff run with either of their veteran quarterbacks, but Howell can at least give them some hope that they have a QB they can turn to for next season.

Thanks to Heinicke, they’ll now have all of Sunday’s game to see what they might get from Howell.