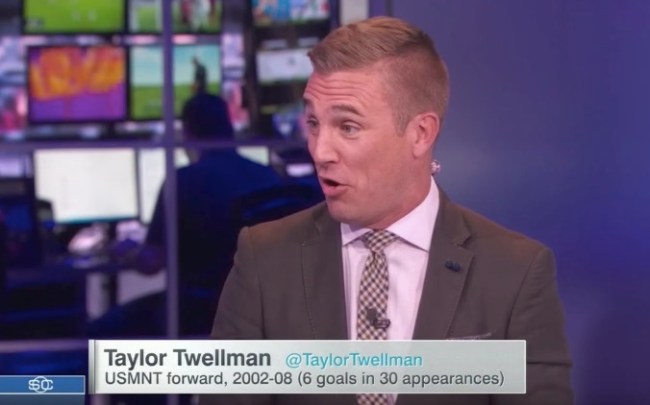 If you haven’t heard by now I hate to be the bearer of bad news, but the USMNT failed to qualify for the 2018 World Cup last night after losing to Trinidad & Tobago. The game started off with the U.S. Men’s National Team scoring an own goal, followed by a rocket from T&T which sent Team USA into the half losing 0-2.

By the way, here’s a shorter version of that rant:

The ‘Golden Child’, Christian Pulisic, managed to score early in the second half but other than that goal, the USMNT was completely lackluster on a night when they needed to play like there was no tomorrow. As it turns out, there is no tomorrow for the USMNT because they failed to qualify and Russia will be the first World Cup without Team USA since 1986, a full 10 years before the MLS was even formed.

ESPN’s Taylor Twellman is a former member of the USMNT who also played professionally from 1999 to 2009 before transitioning into broadcasting. Last night, after the USMNT lost to Trinidad & Tobago and was booted from World Cup qualification after an 88th-minute goal by Panama against Costa Rica, Taylor Twellman was outraged, and rightfully so. Every U.S. soccer fan was outraged by the USMNT’s performance.

Sure, we can complain that Panama’s first goal against Costa Rica never crossed the fucking line and CONCACAF qualifying is a joke because that should 100% be reviewed and should’ve never been awarded as a goal. We can also bitch about the USMNT ‘own goal’ against Trinidad & Tobago last night which sealed the team’s fate with a final score of 1-2. But this team never dominated a year of qualifying matches in which they, by all expectations, should’ve finished 1st or 2nd in the standings. The USMNT needs a complete overhaul in structure, roster, and coaching.

Taylor Twellman put not only his frustration into words but he managed to give words to an entire generation of Soccer fans who woke up this morning completely deflated by the tragic state of US Men’s Soccer. There’s far too much talent in the youth development leagues to let a World Cup slip away. Change needs to happen, and it needs to be structured, methodical, and it needs to be implemented quickly or professional soccer in America might never reach its full potential.