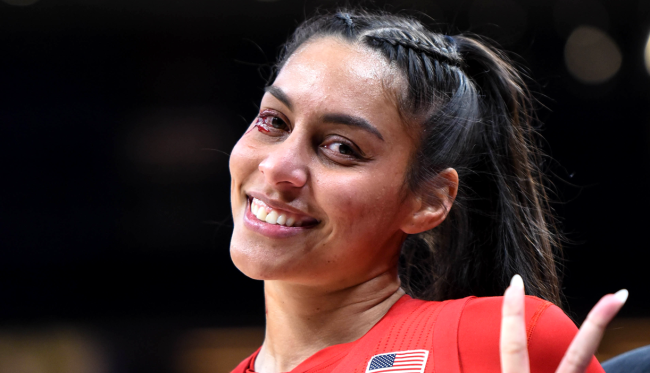 In case you missed it Monday night, a massive brawl broke out during the women’s basketball game between Texas Christian University and George Washington University in Fort Worth.

The donnybrook began when Colonials guard Essence Brown appeared to accidentally pull the ponytail of one of the Horned Frogs’ players as she attempted to collect a rebound with 5:51 remaining in the first half.

Five players from George Washington and three from TCU ended up getting ejected from the game when all was said and done.

It all started with an accidental hair pull and just escalated from there. My goodness. pic.twitter.com/4HIBOqablN

“We never want to be a part of anything like that,” TCU coach Raegan Pebley told the media after the game. “It doesn’t matter to me one bit who started it, who said what. It doesn’t matter. … I definitely know that we have, as do they, high-character kids that the moment got away from all of them.”

Pebley added, “I honestly didn’t see the initial moment, so I can’t really say what it was. What my team is hearing is, it doesn’t matter who started it, no matter what happened. The way to respond, that’s a life lesson. You have to respond the correct way. You can control that element, and that is what I know for sure we did not do well.”

Also after the game, with thousands of people having viewed video of the melee between the two teams, one of the players involved in the start of the fracas, TCU senior forward Bella Cravens suddenly found herself going viral as many male fans found her to be attractive and appreciated her aggressiveness.

TCU girl is a smoke though

“#14 looks like she was having fun mixing it up. Must have old brothers,” another fan tweeted.

@TripleH Get this athlete an invite to the WWE Performance Center. She is big, tough, athletic and don’t you dare pull her hair! @becravens

“Tag #14 so I can follow her,” someone else commented.

I’ll give it to her.. the TCU girl wanted all the action https://t.co/2Fb9KBTgv0

Cravens, who actually won the Big Ten Sportsmanship Award twice while playing for the Nebraska Cornhuskers before transferring to TCU suddenly found her Instagram account to be a very popular internet destination.

She is no stranger to mixing it up though. The picture at the top of the page is from this year’s Big Ten Tournament game against Michigan where she suffered a bloody eye, but continued to contribute in the Huskers’ 76-73 win.