In The Least Athletic Feat Of The Weekend, Ted Cruz Beat Jimmy Kimmel In A 1-On-1 Basketball Game 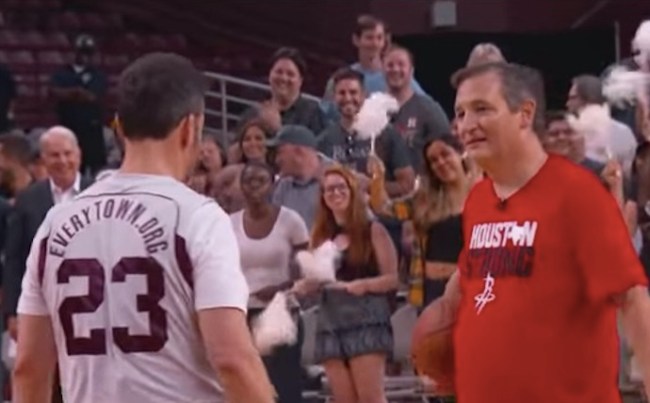 It was a pretty amazing weekend for sports fans. We had the opening round games of the 2018 World Cup in Russia. I didn’t think it was possible to top that Spain-Portugal game on Friday until Mexico upset reigning World Cup champs Germany on Sunday. Out on Long Island, former FSU golfer Brooks Koepka bested the field at Shinnecock Hills in Southampton for back-to-back U.S. Open victories. And then there was Ted Cruz and Jimmy Kimmel playing in the inaugural #BlobfishBasketballClassic.

It all started with Jimmy Kimmel insulting Ted Cruz’s physical appearance when the Senator from Texas appeared at a Houston Rockets playoffs game. From there, the two jabbed back and forth until a 1-on-1 game was agreed upon where the loser would donate $5,000 to a non-political charity of the winner’s choice. They were initially going to play to 15 points but these two husky dads decided to play to 11 instead, and Jimmy lost to Ted in front of a packed house.

First, there’s a video recap from GMA but below I’ve got tweets from the event and a recap of how it all went down, from day 1 on through the game:

.@jimmykimmel All right, Big Guy…you talk a good game. You besmirched my support for the @HoustonRockets 🤨 So let’s settle this man-to-man: one-on-one, hoops (or “ring-ball,” if you prefer). The loser gives $5k to the (non-political) charity of the winner’s choice. https://t.co/BWvAP5VOtM

Left a note for you in your locker room, @jimmykimmel. #KimmelvsCruz pic.twitter.com/N5f0rUgSFt

The crowd was definitely jacked up:

This might be the least athletic photograph ever taken:

.@SenTedCruz dribbles past @jimmykimmel during the Blobfish Basketball Classic. Cruz challenged Kimmel to the game after Kimmel blamed the Houston Rockets playoff loss on the senator. Cruz won 11-9. pic.twitter.com/Tr9pSGemWu

Thy agreed to go to 11 instead of 15 because they were taking so long. https://t.co/hooMxg4fNf

The best part, aside from worthy charities getting donations, is that Kimmel guaranteed victory over Cruz, whom he called a “greasy blobfish.” Cruz embraced the blobfish insult, made it his mascot, then beat Kimmel’s ass. 😂

I’ll send a shout out to Ted Cruz for not letting the ‘blobfish’ comment get to him, for embracing it, and then beating Jimmy Kimmel when it mattered. One can’t help but see an event like and this and think how much better our hyper-polarized state of politics in America might be if we could get more people from opposite ends of the spectrum to come together for events like this where our common interests overlap. You look at a guy like Anthony Bourdain who was very far to the Left on the political spectrum and how he’d talk about being able to sit down with every type of person on the planet and enjoy food, drink, and not talk politics. That was one of the great things about Tony’s show, being able to bring together different walks of life. We need more of that now than ever.