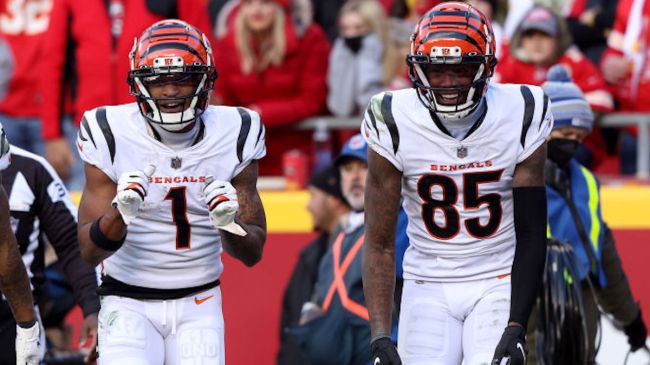 It’s been a tough season for star Bengals wide receiver Ja’Marr Chase as the second-year stud has missed the entire month of November due to injury.

Still, while Chase may be injured that doesn’t mean he isn’t on the sidelines supporting his teammates, albeit with multiple glizzys in tow.

During Sunday’s 20-16 win over the Tenessee Titans (which quietly improved the Bengals’ record to 7-4), Chase got called out by his fellow pass catcher Tee Higgins for chomping on glizzys, a.k.a hot dogs, during the game. This, of course, isn’t the first time an NFL player has been spotted slugging glizzys on the sideline as a mustached Mark Sanchez famously did so while playing for the Jets years ago.

Funnier than the actual act of Chase slamming hot dogs midgame, though, is what Tee Higgins called him as a result: a Glizzy Guzzler.

Luckily for the Bengals and their fans, Chase is reportedly expected to return this weekend in an AFC Championship rematch against the Kansas City Chiefs.

To close out the 2022 season, Chase, Higgins, and the rest of the Cincinnati Bengals will take on the Kansas City Chiefs, Cleveland Browns, Tampa Bay Bucs, New England Patriots, Buffalo Bills, and Baltimore Ravens.

Currently, just a season removed from appearing in the Super Bowl, the Bengals are tied with the Baltimore Ravens for first place in the AFC North with a record of 7-4. Due to tiebreakers, the Ravens would presently win the division while the Bengals would be forced to play in the Wild Card round as the AFC’s #6 seed.