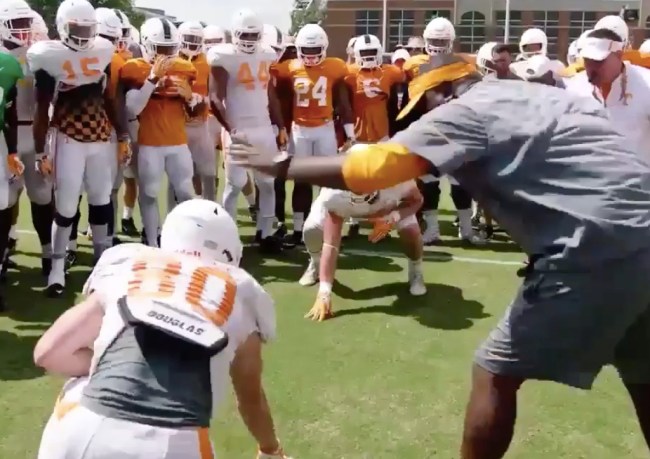 I’m a sucker for the ‘surprise scholarship’ genre of videos on YouTube. The moments when a college football coach surprises a walk-on player with his scholarship to play on the team. It’s always an emotional moment when that walk-on player who has been busting his ass day in and day out throughout the Summer realizes that all of his hard work has finally paid off, and his teammates are always surrounding him to make it that much better.

This one comes from the University of Tennessee Volunteers Football team, and it’s definitely a wild ride on the Feels Train when Eli Wolf is stopped mid-drills to be handed his scholarship by the coach:

I’m no Vols fan. I went to FSU, and the Vols won their last National Championship waaayyyyyyyyy back in 1998 after beating FSU 23-16 in the National Championship. I wasn’t even in college then but I grew up in Florida and an FSU fan since they were the hottest team in the nation from 1989-2002. I still remember munching on sour grapes after that game and haven’t really forgiven UT for that, but that doesn’t mean I hate the team. In fact, I’d love to see the Vols once again rise to prominence in the SEC and start knocking UF around a little bit…So, Vols, if you’re reading this, can you start winning again? K, thx.