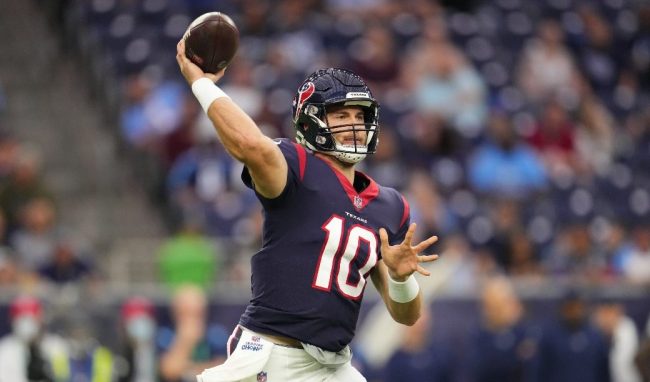 The Houston Texans might have struck gold after drafting Davis Mills in the 2021 NFL Draft. He’s entering the second year of his career after having a rather strong showing in his rookie campaign. Now, it sounds like his teammates are believing hype as one veteran linebacker on the roster views Mills as a true leader for this franchise.

Davis Mills Is The “Unquestioned Leader” Of The Texans

So far in training camp, it sounds like Davis Mills is lighting it up, per James Palmer. The young quarterback played well late in the year last season and the Texans are hopeful he continues progressing. If that’s the case, then Houston will be in a fantastic spot moving forward. This is exactly the type of news fans want to hear after Houston moved on from Deshaun Watson.

Additionally, veteran linebacker Christian Kirksey likes what he’s seeing from the young quarterback. According to James Palmer, Kirksey claims that Davis Mills is the “unquestioned leader” of the Houston Texans. That’s extremely high praise, especially for a young quarterback taken in the third round entering his second year.

Everything’s I’ve gathered on #texans QB Davis Mills down here in Houston. If he makes another jump like he did at the backend of last season, the Texans could have something. My report on @nflnetwork pic.twitter.com/tgdnAT6rAf

Having a good quarterback goes a long way for any football team. It gives the front office plenty to work with as they can focus on building the roster around Davis Mills. If he can genuinely prove to be a franchise quarterback, then the Texans’ rebuild will go much faster than anticipated. Houston will have the privilege of focusing on other areas of need rather than chasing after a top-prospect quarterback in next year’s draft.

Keep an eye on Mills and the Texans as they hope to surprise the league. The roster isn’t where the franchise would like it to be right now, but if Davis Mills turns out to be a stud, then they’ll be back in contention soon enough.