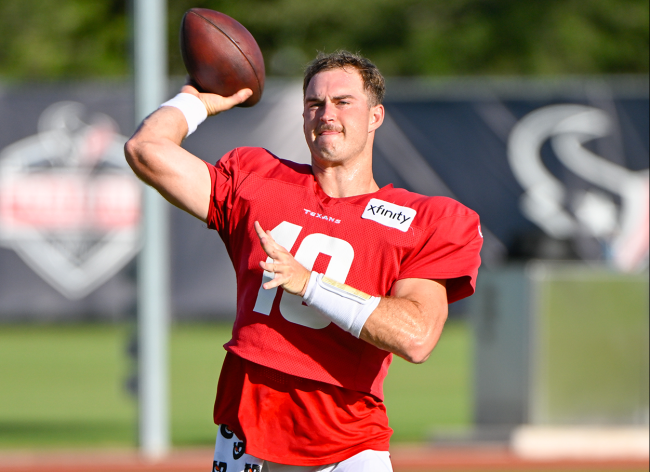 The Houston Texans went 4-13 last season and finished ranked last in total offense. They were abysmal.

However, of the few bright spots, the quarterback play could have been a lot worse. Although he didn’t get much opportunity to shine and had 10 interceptions, rookie Davis Mills completed 67% of his passes for 2,664 yards and 16 touchdowns.

Mills, who was a third round pick in 2021, was thrust into the starting job after an injury to Tyrod Taylor and remained atop the depth chart for the rest of the season. He will enter the fall as the incumbent starting quarterback alongside Jeff Driskel, Kevin Hogan and Kyle Allen.

Despite Houston’s struggles last season, the team hired a new head coach during the offseason and is hopeful that this year will start the process of rebuilding toward relevance. Mills, who stands 6-foot-4, 225 pounds, will be crucial to the team’s success and received high praise from his left tackle this week.

Laremy Tunsil, who protects Mills’ blindside, was asked about his quarterback. He needed only one word to describe him— one that is extremely popular right now.

Here was his response: pic.twitter.com/yEUpkGTvLH

Prior to his time with the Texans, people forget how highly-touted that Mills was as a prospect out of high school. The 23-year-old was a five-star recruit in the Class of 2017, ranked ahead of Tua Tagovailoa, Jake Fromm, Kellen Mond, Sam Ehlinger and Hunter Johnson, among others.

Mills could have gone anywhere in the country and chose to play at Stanford.

Can attack all levels of the field from the pocket. Footwork + the ability to throw with anticipation. Former five star recruit — with developmental upside. @NFLMatchup pic.twitter.com/nlSc3VEvWL

His career with the Cardinal was rather bizarre and he only played significant time in 13 games, which is why people forgot about his talent. Tunsil has not.