Sportsbooks Don’t Think Texas Is Back After Dropping The Opening Line For Next Week’s Matchup Vs. Alabama 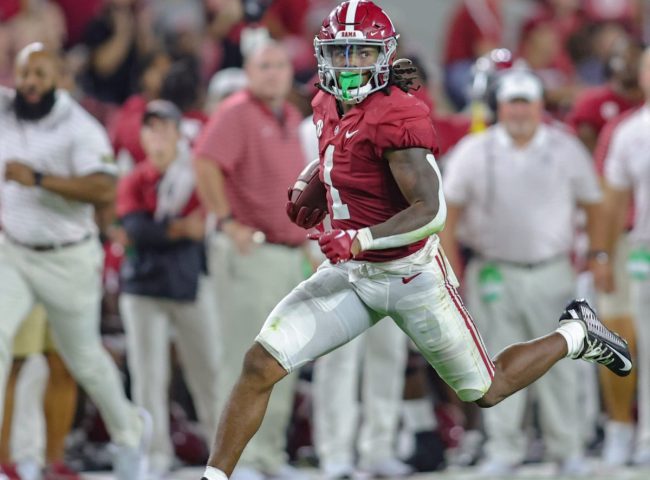 The Texas Longhorns are riding high following a dominant 52-10 win over Louisiana Monroe. The season opening victory gave Texas fans their first glimpse at quarterback Quinn Ewers, while star running back Bijan Robinson was his typical self, rushing for 71 yards and a score.

Now, it’s the same old song and dance in Austin each preseason. “Texas is back” remarks begin to surface as the season nears, only for fans to come to the realization of a six- or seven-win campaign when all is said and done.

Texas has had just one 10-win season since Mack Brown left the program.

And while those Longhorns supporters are ecstatic about an impressive win over an overmatched opponent, the team could come crashing back down to Earth in Week 2.

That’s when they’ll face top ranked Alabama, who’s coming off a pretty impressive performance of their own. The Crimson Tide beat Utah State 55-0 as they look to be a national championship contender once again.

Vegas isn’t ready to crown the Longhorns just yet, and they showed it with a hefty spread in next week’s contest.

Texas opens as three-score underdogs to Alabama in Week 2

The College GameDay crew will be headed to Austin this weekend to watch a big game between two top 25 programs. Despite playing at home, Texas is a three-score underdog against Alabama.

Alabama opens up as a 17.5-point favorite over Texas in Week 2 👀

And many think that number is too low. Take a look at some of the immediate reaction around social media.

One fan says Alabama will cover by the first quarter.

They will probably cover that before the 1st quarter is over

Another expects this spread to keep climbing as the week goes on. “That’ll be 21.5 by Friday night.”

Most others believe Alabama will win in blowout fashion.

This will be Texas’s chance to prove that it is, indeed, back. If they don’t come close to covering this spread, though, fans will likely get a sense of deja vu stemming from those lofty preseason expectations.