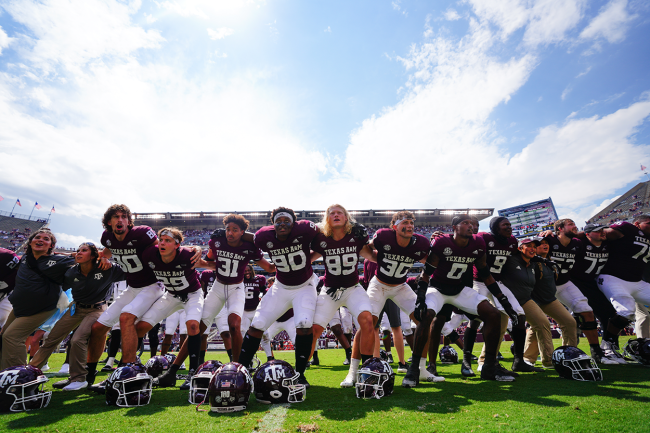 When Gabriel Brownlow-Dindy committed to Texas A&M in December, it marked one of the biggest flips in the Class of 2023. And now he looks like a monster.

Brownlow-Dindy, a five-star defensive line recruit who is the No. 5 player at his position and No. 17 overall player in his class, hails from Lakeland, Florida. He had 27 total offers from top-tier FBS programs and could have played anywhere he wanted.

Initially, that was Oklahoma. Brownlow-Dindy committed to the Sooners in October.

However, when Lincoln Riley left OU for USC, that changed. Brownlow-Dindy took shots at Riley and detailed his false promises before decommitting from the program.

He then went on to sign with Texas A&M on the first day of the Early Signing Period, arrived in College Station in January and enrolled early. After only six months with the program, Brownlow-Dindy looks completely different.

At 6-foot-3, 280 pounds, Brownlow-Dindy was not a small recruit by any means. He continuously posted elite testing numbers throughout his recruitment and put up huge numbers and impressive tape on the gridiron.

Brownlow-Dindy is only 18 years old, but he looks like a 42-year-old defensive line coach. It’s insane.

Gabe Dindy has been at TAMU for 1 semester and he looks like he has ate a person. pic.twitter.com/wVneODuz30

Brownlow-Dindy was part of the best recruiting class of all-time and A&M hopes that he can be an immediate contributor to a national championship run. At his size, it’s hard to imagine an offensive line