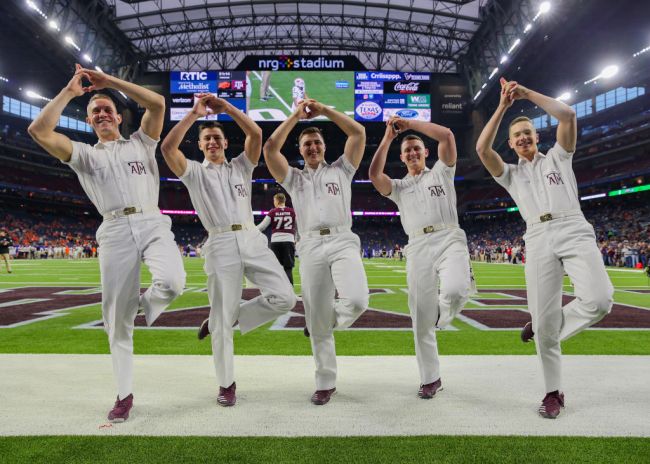 Texas A&M football is a cult and the “Midnight Yell” is the perfect example. Each week, prior to games, the fans gather at Kyle Field — or at a predetermined location on the road — to practice their chants and cheers for the following day.

Five “Yell Leaders” are in charge of leading the cheers, which they apparently call “yells” in college station. It’s a big deal, but it could not be more awkward and cringe-inducing.

In fact, it is the cringiest thing in all of college football.

Prior to the Mississippi State game, which A&M lost, this fella in overalls told a strange story that didn’t really go anywhere and concluded with a very weird cadence of shoutouts. It’s so uncomfortable that you can feel it in your bones, your muscles will start to tighten up and you might feel a lump in your throat.

How they manage to still get recruits is beyond me. pic.twitter.com/KmN9N6kI1h

Another one of the Yell Leaders took the mic at another point in the evening. This man goes on to call Mike Leach the “weirdest, most made fun of, joke of a coach in college football” and says he is “only talked about because we laugh at him.”

He says all of this with a straight face, while looking like this:

This a funny was to describe a coach that is 9-4 against ATM. It’s also weird coming from the weirdest, most made fun of, joke of a fanbase in CFB

And then, let me remind you, the Aggies went on to lose. I am not one to defend Mississippi State, but perhaps Memo Salinas should consider taking a long, hard look in the mirror?

I researched for more info on Texas A&M Yell Leaders and found a handy signal chart…..but it leaves more questions than answers#AggieFactThursday pic.twitter.com/3cl2tZTw9p

I don’t know what to call it, but the entire thing is excruciatingly funny to watch.

This is the only Aggie yell leader video I enjoy pic.twitter.com/Xv6dp57DU9

The tradition dates back to the early 1900s. Texas A&M was an all-male school and its football team was getting blown out early and often.

As a result, the female guests in attendance from Texas Women’s University would leave early. In an effort to keep some semblance of a ratio in tact, and not lose their chance to interact with a member of the opposite sex, the upperclassmen made the freshman entertain the women.

To do so, they raided a janitor’s closet for outfits and started some “yells.” Thus, basically, the all-white coveralls that have become a storied A&M “tradition” are really just the clothes of a janitor.

No seriously, it’s on the school’s website as the official story.

Here is some more background:

Yell Practice became a regular after-dinner ritual in 1913, but the first Midnight Yell wasn’t held until 1931. It began when a group of cadets was gathered in Peanut Owens’ dorm room in Puryear Hall, when someone suggested that all of the freshmen should meet on the steps of the YMCA Building at midnight to practice yells. The freshman asked the two senior yell leaders at the time to attend. The two said they couldn’t authorize the event, but they just might happen to show up. Word about the midnight gathering quickly spread, and that evening, Midnight Yell was born. When Owens became a yell leader, it became a tradition to walk back and forth. This was because Owens’ feet were too big to fit on the steps of the YMCA Building, the original location of Midnight Yell, so he paced in order to keep his balance — and the other yell leaders joined in.

So, to recap, the janitor clothing-donned underclassman had giant feet and couldn’t keep his balance on stairs. Now that clumsy, big-footed freshman is what “makes Texas A&M so special.”

And if that isn’t cringey enough, look at this masterpiece:

Earlier this week, people on social media began to rediscover the Yell Leaders or discovered them for the first time. There were a lot of reactions and they are as hilarious as you might expect.

When another aggie yell leader video comes across my timeline: pic.twitter.com/TtbPN8clep

Spending a lot of time trying to figure out what the benefits are for being a Texas A&M yell leader. I mean c'mon… pic.twitter.com/0mPRzCIoka

The rest of the SEC to the Texas A&M yell leaders pic.twitter.com/m6vhbfNZZW

we should honestly choose yell leaders based on their freestyle skills. no one is making fun of that guy if he had, like, incredible flow.