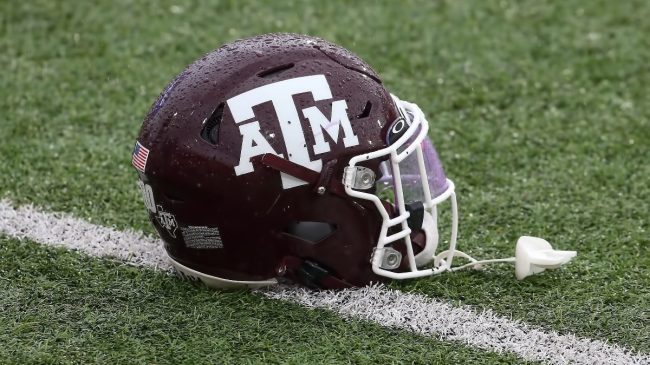 We all know how the Texas A&M Aggies fell to their demise to the App State Mountaineers in Week 2. It was an embarrassing loss for the program. Especially considering the Mountaineers stole College Gameday away from the Aggies for Week 3. However, we might have found something even more embarrassing, as this team just keeps taking loss after loss.

Yeah. If the loss wasn’t embarrassing enough, then this pep rally clip will send Texas A&M fans over the edge. Look, we know every single school in America organizes a pep rally for games. However, this is on a whole new level of cringe. Imagine making fun of App State for being “hillbilles” while dancing around in overalls.

On top of that, none of the jokes were even funny. “I was really confused because Appalaicha isn’t even a state.” Good one, pal. That’s a real zinger that surely hit the hearts of the App State hopeful. Texas A&M played absolutely horrible in Week 2 and this pep rally might be to blame for the loss in general.

It’s pretty hard to defend the clip in question, but that hasn’t stopped plenty of A&M fans on Twitter, Reddit, and beyond from entering the spin zone and pointing to the inherently corny nature of a tradition that stretches back over a century.

If you’re not well-versed in Aggies lore, there’s a good chance you’re unfamiliar with the origins of the Midnight Yell. The tradition can be traced back to postgame dinners cadets at the school began to hold in 1913 before organizing the first official rally in 1931; various cheers have been added over the years, but it still features “yells dating back to the earliest days of Texas A&M.”

While the event has evolved, a number of A&M fans have noted the Midnight Yell is rooted in a sense of humor that tends to come off as fairly forced and dated—the real tradition in College Station is apparently attending the event a few times as a freshman before realizing you’re voluntarily sacrificing time on a Friday night that could be devoted to drinking and partying instead.

Regardless, the video has gone viral and can hardly be found anywhere. However, Texas A&M is down so bad, that even the Dan Le Batard Show roasted Aggie nation.

The App State upset was massive. Not only did they defeat the sixth-ranked college football team in the nation, but Texas A&M paid them over $1 million to play in the first place. Then the Mountaineers took College Gameday right from underneath the Aggies’ feet. Now add this extremely cringy pep rally and that adds up to four total losses in just one week.

Maybe one day Texas A&M can recover, but it won’t be anytime soon.